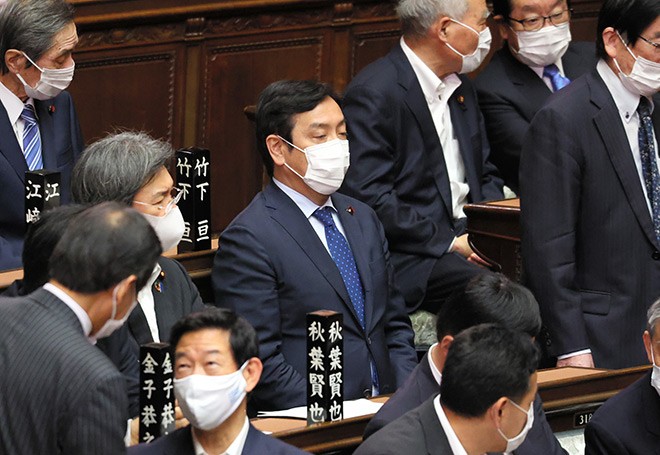 Sugawara, 59, submitted his resignation to both the ruling Liberal Democratic Party and the Lower House on June 1 over suspected illegal donations to people in his constituency, the Tokyo No. 9 district, from 2017 to 2019.

Lower House members who retained their Diet seats as of June 1 can receive about 3.14 million yen ($28,600) as a summer bonus, according to the Lower House secretariat.

Opposition lawmakers speculated that Sugawara waited until June 1 to submit his resignation so that he would be entitled to the full bonus.

“He shouldn’t be allowed to get the bonus in full and escape accountability at the Diet,” Jun Azumi, the Diet Affairs Committee chairman of the main opposition Constitutional Democratic Party of Japan, told reporters.

“From the beginning, I was planning to return the full bonus given at the end of this month, so I’ll start the process,” Sugawara said in a message posted on his Facebook account on the evening of June 2.

Tokyo prosecutors were expected to bring a summary indictment against Sugawara on charges of violating the Public Offices Election Law.

Asked about Sugawara’s case at a news conference on June 2, Chief Cabinet Secretary Katsunobu Kato said, “I think politicians must fulfill their accountability for their own political activities.”

As chief Cabinet secretary, Suga is believed to have played a key role in helping Sugawara win his first Cabinet post in September 2019 under the Shinzo Abe administration.

(This article was written by Hideki Kitami and Yuichi Nobira.)