Omi: Abnormal to hold Tokyo Olympics during a pandemic 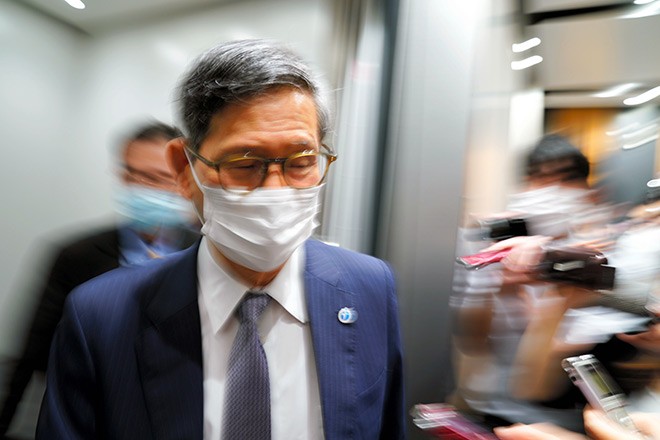 Shigeru Omi, the chairman of the government panel of experts on the novel coronavirus on May 21 (Ryo Kato)

The chairman of the government panel of experts on the novel coronavirus said it would be “abnormal” to hold the Tokyo Olympics during a pandemic, but his warning was largely dismissed by ruling party officials.

At a June 3 session of the Upper House Health, Welfare and Labor Committee, Shigeru Omi also said it would be “meaningless” to only implement the infection prevention measures laid out in the Olympic organizers’ so-called playbook for how athletes and officials should act during the event.

“It would be abnormal to hold (the Olympics) in a place where a pandemic is occurring,” said Omi, a leading expert on infectious diseases. “If it is to be held, there will be a need to have a very strong sense of what needs to be done.”

He called for additional anti-virus measures since the movement of Olympic spectators represented a major infection risk.

Omi also repeated his view given earlier in the Lower House that the scale of the Olympics should be reduced.

He said that he and other members of the panel, which is tasked with dealing with the COVID-19 pandemic, were preparing to submit their views on the risks of holding the Olympics.

“It is the responsibility of professionals to assess the infection risks and the effects on the medical care system,” Omi said.

Health minister Norihisa Tamura indicated at a June 4 news conference that the views presented by either the panel or some members would not be considered an “official opinion.”

Instead, Tamura said, such views would be treated as “the results of independent study” by panel members.

After the Upper House session, a high-ranking member of the ruling Liberal Democratic Party said Omi had overstepped his boundaries.

Pointing out that Omi was not in a position to decide on whether to hold the Olympics, the LDP lawmaker said Prime Minister Yoshihide Suga has clearly stated that the Tokyo Games would go ahead in July.

However, lawmakers of opposition parties and even the LDP’s junior coalition partner agreed with Omi’s comments.

“I hope Prime Minister Suga will once again explain to the public the significance of holding the Olympics,” said Kazuo Kitagawa, chairman of the Central Secretariat of coalition partner Komeito.

Kazuo Shii, head of the Japanese Communist Party, said: “It was a very important statement. We cannot allow any measure that would be equivalent to closing one’s eyes and pushing the public off a cliff.”

Yuichiro Tamaki, leader of the Democratic Party for the People, said it was unthinkable to hold the Olympics when there is the possibility of a further spread of infections.

(This article was compiled from reports by Jun Tabushi and Tamiyuki Kihara.)