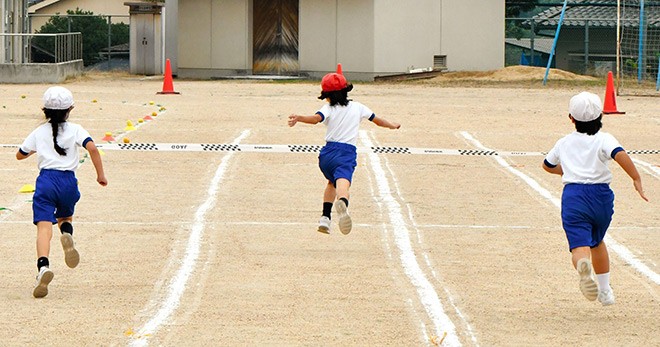 The death of an 11-year-old boy has raised questions over whether children should wear anti-virus masks in physical education classes, and if students themselves can continue making that decision.

The debate essentially comes down to whether to risk novel coronavirus infections or heat-related illnesses.

The fifth-grader in Takatsuki, Osaka Prefecture, collapsed during a five-minute run on the elementary school playground around 9 a.m. on Feb. 18. He was taken to a hospital but died from heart failure in the early afternoon, according to the city education board and the boy’s father.

When he was moved to the school’s sick room, a mask was seen hanging around his chin.

An education board official said, “We have not identified the cause of death, including the impact of the mask.”

Although it is not known if the boy wore the mask during the run, word of the death spread, and now education boards, schools and parents around the country are weighing the risks of COVID-19 against heat illnesses, as well as the guidelines on mask use at schools.

The Takatsuki education board’s guidelines clearly state that students wearing masks “should refrain from exercises that cause shortness of breath.”

However, a representative of the board said the school’s five-minute run was “not a speed competition” and, therefore, it “is not an exercise that shortens their breathing.”

The elementary school had told pupils that they could remove their masks during physical education classes. But if they were worried about novel coronavirus infections, they could continue wearing them.

The boy’s father raised a question, “Is it OK to leave the decision up to children when it is hard for them to remove their masks if others around them continue wearing them?”

According to a source close to the education board, about two-thirds of the pupils were wearing masks during the five-minute run.

Juji Sugioka, head of the Sugioka Clinic in Funabashi, Chiba Prefecture, said that exercising with a mask on could decrease the level of oxygen delivered to the brain or heart and cause hypoxia.

Such mask-wearing also raises the risk of heat illness because masks can trap heat or make people miss signs of dehydration.

The Japan Sports Agency issued guidelines that said mask-wearing was unnecessary in PE classes in May 2020, a month after the death of a mask-wearing junior high school student at a gym class in China.

But the agency’s guidelines also say that requests from children to keep wearing the masks should not be denied.

Education minister Koichi Hagiuda on May 28 said at a news conference that the ministry had once again issued a notice to local governments to read the agency’s guidelines.

A representative of the education board of Tokyo’s Itabashi Ward said, “Preventing heat illness is the most important thing. We have told schools that students should take off their masks in PE classes, in principle, on the premise that they keep a safe distance from people around them.”

But an education board of a different ward in the capital was more concerned about the spread of the novel coronavirus. Its guidelines instruct students to continue wearing masks, in principle, except when there is a high risk of developing heat illness.

In such high-risk situations, students can remove their masks if they maintain a safe physical distance from each other.

“Preventing heat stroke is important, too, but without masks, more people will be deemed to have been in close contact with a COVID-19 patient, and that will lead to a school shutdown,” a representative of the board said. “Maintaining a balance is difficult.”

Parents have expressed frustration over the guidelines.

A woman in her 40s whose child attends a public elementary school in Tokyo said that 80 percent of the pupils dancing for 10 minutes at an athletic festival in late May were wearing masks.

“That made me worried,” she said.

The woman said the school’s guidelines stated, “Children should wear a mask, in principle, at the athletic festival, but we will leave it up to the students whether to put on or take off their masks in competitions.”

The woman said about half of the children did not wear masks in a footrace, but the majority did for the dance.

“I was watching it with bated breath, worrying if a child would collapse,” she said. “It is a life-threatening matter, and I thought the school’s guidelines were irresponsible.”

Kojiro Ishii, a professor at Doshisha University’s Faculty of Health and Sports Science Department, said: “Do not leave the decision up to children. Adults should give the instructions.”

He said children may have difficulties noting abnormal changes in their condition, and they tend not to take off their masks when people around them are wearing them.

Ishii also said children will not catch the novel coronavirus “just by passing each other.”

“When they do an exercise such as running, they should keep a distance of more than 1 meter,” he said. “That will decrease the possibility of inhaling saliva droplets gasped out from others, and the risk of infection is almost zero.”

Many infection clusters have occurred among members of athletic clubs, but they did not contract the virus while exercising or playing a sport, Ishii said. Rather, they mainly contracted the virus through conversations in changing rooms or while eating.

(This article was written by Azusa Kato, Tomomi Abe and Azusa Mishima.)