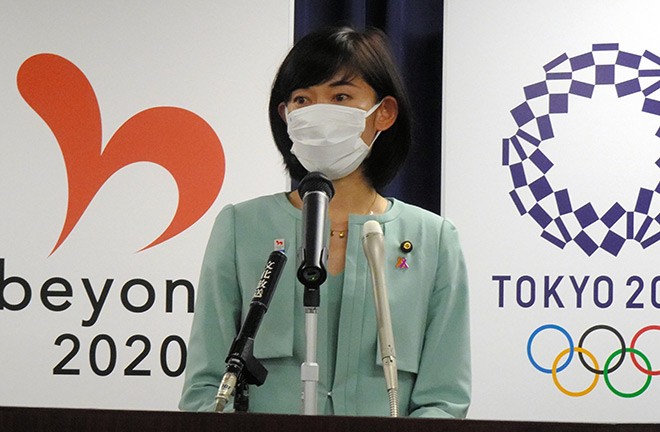 Tamayo Marukawa, the state minister in charge of the Tokyo Olympics and Paralympics, speaks at a news conference on June 4. (Taro Ono)

A scheduled Olympic reception to be hosted by Prime Minister Yoshihide Suga has been canceled to prevent a spread of COVID-19 cases, joining other events related to the Tokyo Olympics that have been called off.

Tamayo Marukawa, the state minister in charge of the Tokyo Olympics and Paralympics, made the announcement during a June 4 news conference.

The reception was planned for Aug. 8, when the Closing Ceremony of the Tokyo Olympics is scheduled.

Foreign dignitaries and those with ties to the International Olympic Committee would have been invited to the reception at a Tokyo hotel hosted by Suga.

“From the standpoint of preventing infections, it was considered inappropriate to have a large group of people gathered for wining and dining,” Marukawa said at her news conference.

According to government sources, the reception was initially to have been held prior to the Closing Ceremony.

Foreign dignitaries and IOC officials planning to attend the ceremony would have been transported between the hotel and the National Stadium where the Closing Ceremony will be held.

However, the novel coronavirus led to the cancellation of the reception, as have some other events connected with the Tokyo Olympics. One is the ceremony that was to have been held at the National Theater in the capital’s Chiyoda Ward to mark the start of the IOC meeting in Tokyo.

The government had also asked foreign governments to limit to 12 those accompanying foreign leaders or sports ministers coming to Japan for the Olympics to prevent a spread of infections. But that number has been relaxed to up to 40 because of requests from various governments for a larger delegation to provide adequate security for the leaders.