Schoolgirl helps the homeless with free meals and kindness 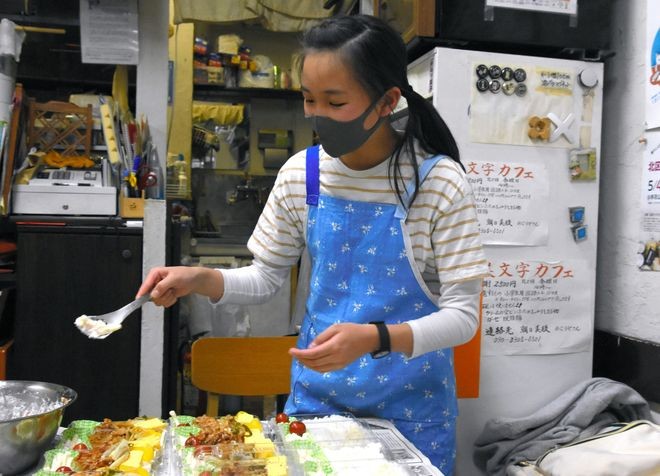 Kanna Matsuo packs food containers with a macaroni salad in the Akabane district of Kita Ward in Tokyo on April 27. (Shoko Mifune)

Along a shopping street that starts from Akabane Station in Tokyo, few people could be seen out under the state of emergency and many outlets had turned off their lights.

However, with its shutter closed halfway, a light peeked through one of the eateries.

Kanna Matsuo, 12, was seen adeptly packing meals in containers among adults a little past 8 p.m. at the restaurant.

The sixth-grade girl, who goes by the nickname Kan-chan, swiftly closed the food boxes’ covers with rubber bands and placed disposable chopsticks between the flaps and the elastic bands.

The 40 containers quickly became filled with seven dishes, including Chinese-style fried meat and green peppers as well as “tamagoyaki” omelet.

Kan-chan was working at Social Community Meguriya, a natural food restaurant. The family who owns the eatery started offering support for those who are struggling financially after getting to know a former homeless woman.

Using a subsidy targeting businesses that have suspended operations during the novel coronavirus pandemic, Meguriya started distributing boxed meals, disposable heat pads and other goods to those who have little money every night free of charge from January this year.

The packed meals that Kan-chan and others prepared that day were placed in front of the store so that poor individuals can pick them up for free.

Kan-chan began helping the endeavor this past spring in late March. She read about Meguriya’s activities in an online article and realized the story was about “the restaurant located on the way to my cram school.”

She had studied the significance of lives at school and engaged in efforts to protect dogs and cats. Though Kan-chan did not know much about poor individuals, she had seen people forced to spend nights on the streets nearby.

Shortly after reading the article, Kan-chan told her mother, Keiko, 44, that, “I want to help them.” Keiko encouraged her daughter, saying, “You should do what you would like to do.”

The first challenge for Kan-chan to overcome was how to approach Meguriya. Kan-chan and Keiko decided that she should carry old clothing kept at their home with her to the restaurant first of all.

On her second visit to Meguriya, Kan-chan brought vegetable juice drinks with her and gathered up the courage to ask the staff if “there is something I can do to help you.”

Her first “assistance” mission was distributing onigiri at a neighborhood park with restaurant staff members.

Kan-chan handed rice balls to those who stay overnight outdoors there. While one of the homeless people said, “I am not worthy of your kindness,” another asked the girl, “Can I really have this?”

Seeing homeless individuals happily accepting onigiri, her impression of people with no places to live dramatically changed. Kan-chan had previously felt “scared” when she spotted such individuals.

Kan-chan’s devotion brought about changes likewise in those who show up at Meguriya.

A man in his 60s, who receives public livelihood protection assistance after he had to give up working as a taxi driver due to his bouts of epilepsy, is one of those people. When he was given a boxed meal by Kan-chan, he grinned happily.

“That guy has changed so much,” said Yasunori Hashimoto, 68, the owner of Meguriya.

The former cab driver used to look downward frequently and appeared to avoid communicating with others. But he now delivers free meals from Meguriya to other homeless people who cannot go pick them up on their own.

When Kan-chan found another 60-something homeless man shivering in front of a bench with an injured leg, she and her mother took curry to him so that they could consume the meal together on a picnic blanket spread out before the bench.

The man, slowly and haltingly, started talking about his life. According to his accounts, he used to be a carpenter and seafood caught in his hometown was very tasty.

Hearing the man saying he “did all I could do,” Kan-chan presented him with a pouch filled with a toothbrush and adhesive bandages that she bought with her own money.

“I want to grow up to be an adult who will stay close to people in trouble,” said Kan-chan.

She added that she will continue helping the restaurant every day as long as it continues to distribute boxed meals.