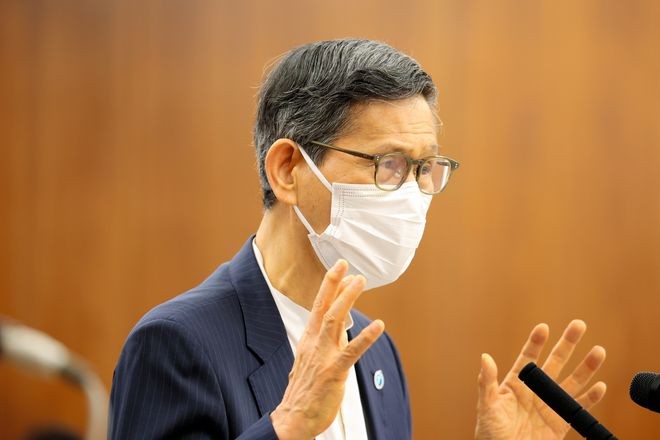 Shigeru Omi, the head of a government pandemic-response panel, responds to questions about the Tokyo Olympics at the Upper House Committee of Health, Labor and Welfare on June 3. (Asahi Shimbun file photo)

One of the tasks of the U.S. National Institute of Allergy and Infectious Diseases (NIAID) is to provide expert advice to the White House, and director Anthony Fauci often clashed with President Donald Trump last year over COVID-19 response measures.

Trump's top priority was an early reopening of the economy, which Fauci reproved sternly as premature.

The frustrated president called him a "disaster" and even worse, but Fauci stood his ground, impressing me deeply with his professionalism.

Here in Japan, Shigeru Omi, the chairman of the government panel of experts on the novel coronavirus, has lately behaved more like Fauci's double.

Appearing daily in the Diet, Omi has sharply questioned the wisdom of holding the Tokyo Olympics next month.

He even declared it would be "abnormal" to go ahead with the Games while the pandemic still raging and pressed the government to explain its reasons for holding them.

And he warned to the effect that the government had better be totally prepared for the consequences.

It was as if he was challenging the government to take full responsibility in the event the virus spreads further.

The gist of Omi's argument is that it won't be sufficient to strictly isolate athletes and Olympic-related personnel only.

He is right. Volunteers will be commuting back and forth between their homes and Olympic venues, and fans will be allowed outdoors to watch the events at various locations. Furthermore, the festive mood will likely make the public less prone to practice strict self-restraint.

I can only pray that the government and the International Olympic Committee will not be so callous as to ignore Omi's warnings.

In 2014, the year after he became president of the ICO, Thomas Bach stated, "We need to change because sports today is too important in society to ignore the rest of society. We are not living on an island."

Not only Bach, but Prime Minister Yoshihide Suga and Tokyo Governor Yuriko Koike should also take these words to heart.