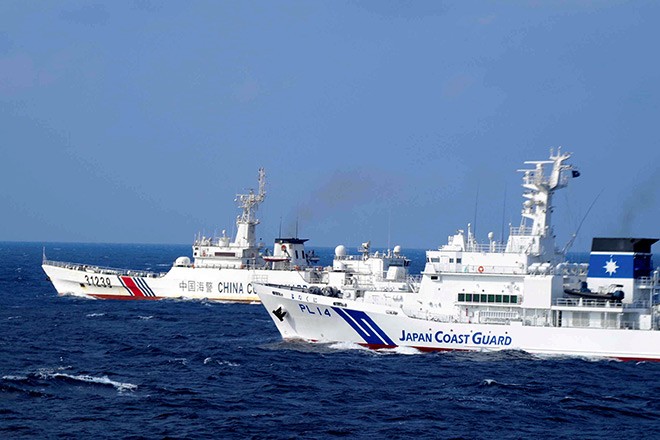 Chinese government vessels were spotted just outside Japanese territorial waters near the Senkaku Islands in the East China Sea for a record 112th straight day on June 4, the Japan Coast Guard said.

The previous record of 111 days in a row in the contiguous zone there was set between April and August 2020.

As of June 3, there had been 18 instances of Chinese government vessels intruding into Japanese territorial waters this year. The Japan Coast Guard said it is using cutters to monitor the activity because Chinese ships have frequently moved close to Japanese fishing boats.

China sharply upgraded its presence in the area after Tokyo acquired three of the five uninhabited Senkaku Islands from private ownership in September 2012.

Japanese authorities have also voiced concern about the presence of increasingly large Chinese Coast Guard ships in those waters.

December 2015 marked the first confirmation that China was arming its ships in this way. Since then, more incidents have occurred of Japanese boats being approached by armed Chinese ships.

“We consider this to be a very serious matter,” Chief Cabinet Secretary Katsunobu Kato said at his June 4 news conference. “We plan to deal with the issue in a calm, but firm manner.”

“The Diaoyu Islands and affiliated islands are Chinese territory, so the sailing of Chinese Coast Guard ships in those waters is a valid measure based on law,” Wang Wenbin, a Chinese Foreign Ministry spokesman, said at a June 4 news conference in reference to Tokyo’s criticism that the acts are violations of international law.

China refers to the Senkaku Islands as the Diaoyu Islands.

A former high-ranking official with the Chinese Coast Guard who was involved in patrols near the Senkakus accused Japan of blowing the matter out of proportion.

“We formulated plans more than 10 years ago to constantly have cutters in those waters all year round and we made our intention known to Japan,” the former official said. “We are now simply following through on that plan.”

(This article was written by Masanori Isobe in Tokyo and Takashi Funakoshi in Beijing.)