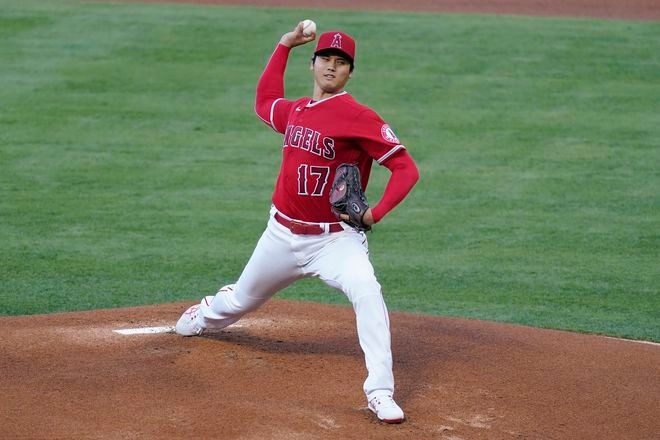 ANAHEIM, Calif.-- Shohei Ohtani gave up a leadoff homer on an underthrown fastball, and it didn't shake him. He maintained his mechanics, deployed his vicious splitter and mostly shut down the Seattle Mariners for six strong innings.

And after he left, Ohtani cheered along with his Angels teammates when Raisel Iglesias came through with a monster of a six-out save.

Justin Upton hit a two-run homer for the Angels, and Iglesias escaped a bases-loaded, nobody-out jam in the eighth inning before finishing off the second win of the season for Ohtani (2-1).

J.P. Crawford tagged Ohtani for a homer on the game's second pitch, but the two-way star's mound maturity has grown since the start of this season. Ohtani struck out Seattle's next three batters — and by the time he was finished, he hadn’t walked anyone for the first time in his 20 career major league appearances.

“I didn’t really change much after that home run,” Ohtani said through a translator. “Obviously it got too much of the plate, and I’ve been getting hit when I leave it too much over the plate.”

Aside from allowing three extra-base hits leading to two runs, Ohtani looked sharp in his eighth pitching appearance this season. Facing Seattle on the mound for the first time since his AL Rookie of the Year season in 2018, Ohtani retired eight of his final nine batters before being pulled after just 76 pitches — far too many of them splitters for the Mariners' taste.

“He’s got one of the special pitches in our game,” Mariners manager Scott Servais said. “You go across the game, the Ohtani split-finger, it’s about as good as it gets, and when he’s commanding it like he was tonight, it’s a real challenge. It’s as good a pitch as you’re going to see in the league.”

Ohtani also went 0 for 2 with a walk in the No. 2 spot in the Angels' lineup while hitting for himself in an AL game for the fifth time this season.

Crawford hit his first career leadoff homer and drove in both runs for the Mariners, who lost to the Angels for only the second time in five meetings this season.

Ohtani still wouldn't have earned his first victory at Angel Stadium since 2018 without Iglesias, who came through superbly in the eighth after teammate Mike Mayers allowed three runners on six pitches.

The Angels' first-year closer got a foul pop and two strikeouts against the Mariners' 2-3-4 batters.

“Once Iggy came in, it was the Iggy show, and I was just sitting back and watching the show,” Ohtani said. “It seems like he shines in those pressure situations.”

Iglesias then pitched a perfect ninth for his 10th save.

“It was definitely one of the most complicated and exciting outings I’ve ever had in my entire career,” Iglesias said through a translator. “You tell yourself you have to keep your focus and go out and do your job.”

Taylor Trammell hit a leadoff double in the third and scored on Crawford's sacrifice line drive to right, but Upton tied it with his 12th homer of the season in the third, matching his total from the 2019 season in 15 fewer games.

“Goes without saying he’s obviously an unbelievable player, as a pitcher and a hitter,” Trammell said after facing Ohtani for the first time in his career. “We all see it. ... It’s very good when it starts in the middle of the plate and just drops down. It's a really good splitter.”

Upton also homered in his second straight game and in his fourth straight game overall at Angel Stadium, a mark surpassed among Angels only by Bobby Bonds, who homered in five consecutive games in Anaheim in 1977.

The Mariners barely kept it a 3-2 game in the seventh. Juan Lagares tried to score from third when Will Vest's pitch got away from Tom Murphy, but Murphy threw to a sprinting Vest, who made a diving tag on Lagares' hip as he slid headfirst.

Mariners: Dugger and the bullpen filled in for Justin Dunn, who went on the injured list Wednesday with inflammation in his throwing shoulder.

Angels: LHP José Quintana is playing catch at 90 feet after going on the injured list Monday with left shoulder inflammation.