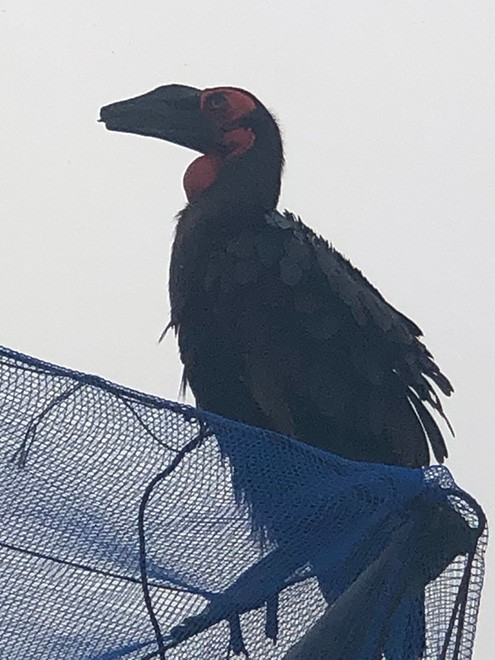 The Southern ground hornbill perching on a net in an orchard in Kashiwa, Chiba Prefecture, on May 28 (Provided by Nobuaki Sawa)

An endangered Southern ground hornbill, a species of large bird native to southern Africa, was finally captured in Chiba Prefecture adjacent to Tokyo after it escaped from a pet shop in neighboring Ibaraki Prefecture.

Sightings of the bird had been reported in Kashiwa, Chiba Prefecture, as far back as July 2020 as well as at Tegae Higashi Elementary School in Kashiwa from February to May.

“We were stunned when our pupils reported seeing a huge black bird near the swimming pool,” said Nobuaki Sawa, the school’s principal. “They consulted a pictorial book and found that the bird is a Southern ground hornbill. We are relieved to know it does not attack humans.”

After the sightings, the bird was believed to have made Chiba Prefecture its new home.

The bird measures about 1 meter from the beak to tail and has a wingspan of about 2 meters.

Southern ground hornbills are designated as a “vulnerable” species by the International Union for Conservation of Nature and Natural Resources (IUCN) Red List.

It inhabits savanna and other areas south of the Equator in Africa and cannot fly long distances. Once it settles in an area, it never migrates, according to the Yamashina Institute for Ornithology in Abiko, Chiba Prefecture, and the IUCN. Unless threatened, it will not attack humans.

The Ibaraki prefectural government’s animal welfare center said it received a report on the Southern ground hornbill's disappearance some time ago.

The pet shop in Ibaraki Prefecture where it was raised specializes in raptorial species. Store officials said the bird was kept outdoors and tethered with a leg ring. Staff rushed to capture the bird each time a sighting was reported.

Since international trade in Southern ground hornbills is not banned under the Washington Convention and the species is regarded as nonthreatening to humans, the owner of the bird is responsible for catching it if it goes missing.

Shop staff said they were informed of the bird’s capture on June 5.

Takashi Hiraoka, communications director at the Yamashina Institute for Ornithology, expressed surprise the bird had survived a winter outdoors in Japan.

“I thought it would be less likely that it can survive a Japanese winter as the animals it feeds on go into hibernation,” he said. “The bird should be returned to where it belongs to maintain a balance in the ecosystem.”