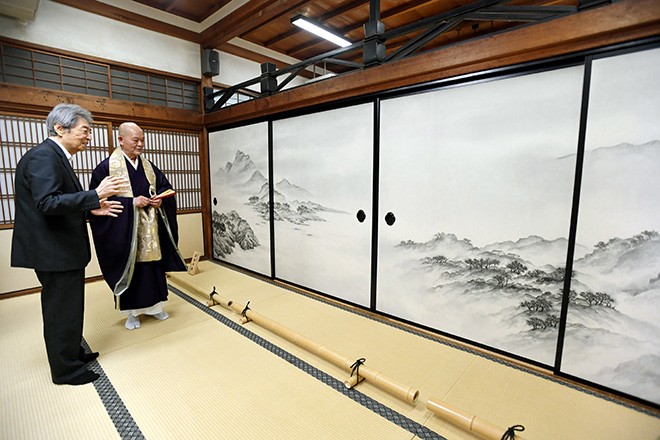 KYOTO--Morihiro Hosokawa, who served briefly as prime minister and devoted his retirement from politics to painting, on June 5 presented a series of his sliding screen ink work to a Buddhist temple here that has centuries-old links with his family.

Hosokawa, 83, has won wide acclaim for his expertise in art and brushwork.

The ink paintings were drawn on both sides of 12 sliding paper doors to adorn the study of the main hall of Kenninji temple in the city's Higashiyama Ward.

“I did my best to draw the pictures while preserving Japanese culture,” Hosokawa said.

The drawings went on public display June 6 in a special exhibition that is scheduled to last throughout the year.

The temple commissioned Hosokawa to work on the paintings to mark the 880th anniversary of the birth of Eisai (1141-1215), the monk who brought the Rinzai school of Zen Buddhism to Japan from China and founded Kenninji temple in 1202.

His work depicts two rivers in China's Hunan province and eight scenic spots near Lake Dongting where the rivers end their journey. He spent about a year on the project and completed the drawings in January.

As to why he chose that particular subject matter, Hosokawa said, “Pictures drawn with ink match a Zen Buddhism temple with a garden designed with stones and sand to represent nature and the universe.”

Jochu Okumura, the head of the Rinzai sect, said in a June 5 ceremony to mark the presentation of the pictures that he hoped “as many as people will see them and preserve them for future generations.”

The Hosokawa family has a personal connection with Kenninji, a UNESCO World Heritage site, as the temple is the site of an ancestral grave dating from centuries ago.

Hosokawa, a descendent of the Hosokawa clan that ruled what is now Kumamoto Prefecture, served as prime minister from 1993 to 1994.

After retiring from politics in 1998, he ardently took up calligraphy, ink painting, pottery and other artistic activities.

He also painted a folding screen at Todaiji temple and drew pictures on the walls of Yakushiji temple, both UNESCO World Heritage sites in Nara.