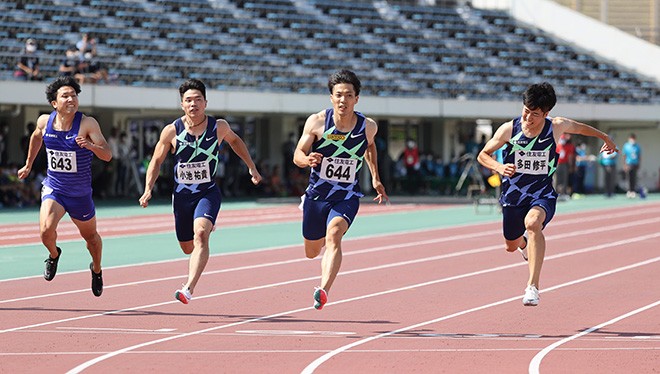 Ryota Yamagata, second from right, wins the final of the men’s 100 meters with a Japan record of 9:95 seconds at the Fuse Sprint meet held in Tottori on June 6. (Pool)

Ryota Yamagata set a Japan record with 9:95 seconds for the men’s 100 meters June 6, becoming the fourth Japanese sprinter to run the distance in under 10 seconds.

The previous record of 9:97 seconds was set by Hakim Sanibrown in 2019.

Yamagata set the record at the event held in Yamata Sports Park Stadium in Tottori, easily clearing the Olympic trial time of 10:05 seconds to eye a slot in the Tokyo Olympics next month.

Yamagata will compete in the Japan National Championship later this month with Sanibown and Yoshihide Kiryu.