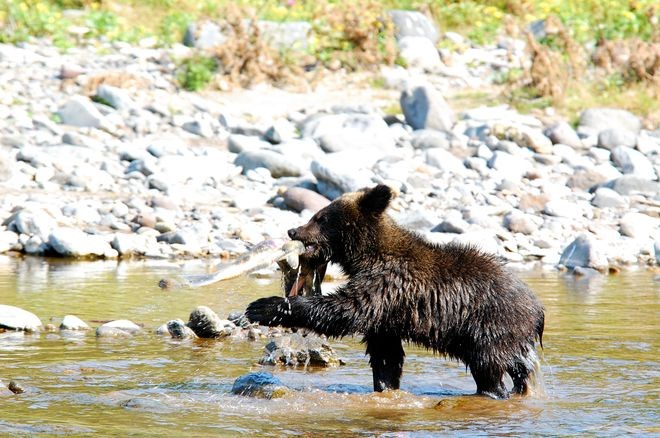 Brown bears inhabit Shiretoko Peninsula and other parts of Hokkaido. (Provided by the Environment Ministry)

Two ministries have ceased a turf war and embarked on a joint mission to place some of Japan’s national parks on a world top 25 list selected by an influential travel review website.

The Environment Ministry and the Ministry of Agriculture, Forestry and Fisheries have designated five priority areas for the program, including the UNESCO World Natural Heritage sites of Shiretoko in Hokkaido and Yakushima island in Kagoshima Prefecture.

The effort to give these areas a facelift will require pursuing the conflicting goals of preserving nature and harnessing it.

Tripadvisor, the travel review website in question, has released a list of the world’s top 25 national parks, which include Yellowstone of the United States and Kilimanjaro of Tanzania, but no parks from Japan.

Three of the five priority parks designated by the environment and agriculture ministries feature magnificent nature--Shiretoko, Yakushima island and the Iriomote-Ishigaki National Park in Okinawa Prefecture.

The Forestry Agency has been maintaining forest reserves and other woodlands in national parks. However, the work has been prone to bureaucratic sectionalism because land management and park administration are handled separately.

The agency will eventually transfer its land management authority to the Environment Ministry, the officials said.

“Cooperation between the two ministries will allow rare species to be preserved more effectively together with their habitats,” said Masato Ono, director of the Conservation Project Division of the Nature Conservation Society of Japan.

Under the plan, the ministries will first work to improve the quality of the nature in the priority areas, including toughening measures to preserve rare species, while harnessing nature resources, such as through designated areas open only to guided tourists.

The ministries will set up signboards at entrances to these areas and take other measures so visitors understand that they are entering national parks.

They plan to later collect admission fees from tourists to cover the expenses of nature preservation and maintenance.

At Shiretoko National Park, for example, authorities will continue protecting the Blakiston’s fish owl and other rare species, while turning the park into a tourist destination where visitors can see large animals, such as brown bears, orcas and whales.

The ministries envisage allowing limited numbers of guided tourists into the innermost part of Shiretoko park, which is currently visited by only about 100 people annually.

“Both nature and visitor experience will improve in quality if the number of tourists is kept under control to ensure that rare species, landscapes and other features will not be lost,” Ono said. “The success of front-line cooperation between the ministries will be key to improving the draw of the national parks.”

“We hope to make all possible preparations right now, given that inbound visitors from abroad are not returning any time soon,” said Environment Minister Shinjiro Koizumi, referring to the COVID-19 pandemic.