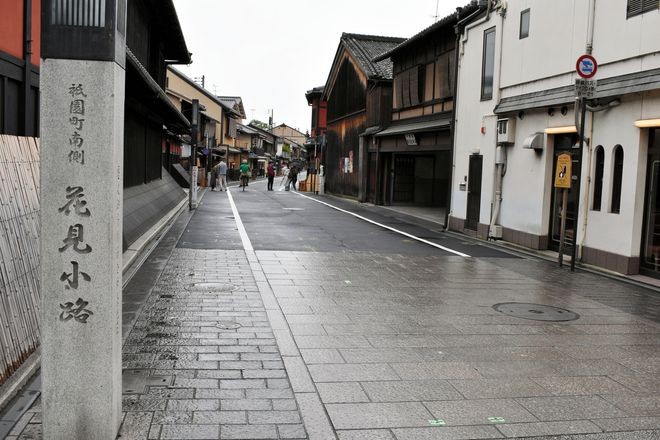 With few people walking around, Hanamikoji Street in Kyoto's Higashiyama Ward is quiet on May 27. (Satoko Onuki)

KYOTO--Geisha and their "maiko" trainees are being forced out of work here as the COVID-19 pandemic rages on, shutting down parties where the traditional artists make their living entertaining guests by playing music and dancing.

Parties have been scrapped in all five major "kagai" traditional entertainment districts here, leading some of the women, collectively known as "geimaiko," to quit the business.

"Last year, I made only 10 percent of my usual income. I have to dip into my savings to pay my daily expenses," said a geisha based in the Kamishichiken district.

While maiko trainees are postponing their debuts, some geimaiko have chosen to leave the kagai districts, citing drastically reduced incomes and uncertainty about the future.

The number of geisha, called "geiko" in Kyoto, working in the five districts fell from 169 in March 2020 to 161 in March 2021, while the number of maiko declined from 81 to 68, according to the Kyoto Traditional Art Foundation, a public interest foundation working to preserve and pass down the kagai district culture.

According to insiders, an increasing number of "shikomi-san" (prospective trainees) have also postponed their maiko debuts.

"With no geisha parties being held due to the coronavirus, some geiko have quit, saying that they didn't know what to expect in the future," said the Kamishichiken-based geiko.

Usually, she would find her appointment book filled with party dates between March and April, largely thanks to a series of "Kitano Odori" dance performances. But the spring tradition has been canceled for two straight years now.

She also canceled her dance and music lessons to avoid close contact with others.

"I had always worn kimono every day for lessons and parties ever since I was a 'shikomi' after graduating from high school, but it is my first year not wearing kimono on so many occasions," she said with a wry smile.

While the kagai districts continue to be in dire straits, geisha are the ones hit hardest by the pandemic.

While they work as maiko, their rents, groceries and other living expenses are shouldered by "okiya" geisha lodging houses.

But when they go independent as geiko, they become self-employed and their main source of income are "hanadai" party fees that their clients pay them, which have evaporated due to the lack of parties.

Teahouse associations have made various efforts to provide support for geiko, helping them apply for government pandemic relief money and setting up a no-interest loan program.

The Kyoto Traditional Art Foundation also provided financial support to teahouse associations in April 2020 and again in January this year so that each geimaiko could receive a total of 120,000 yen ($1,100) in a lump-sum payment.

But many geiko are still suffering from financial difficulties because they are not eligible for compensation or other support for restaurant operators.

"Teahouses can receive government support money each day because they are restaurants, but there is no compensation for geiko to support their daily living," said Saburo Nakanishi, a board member of the teahouse association for the Gion-Higashi district.

Nor can the women turn to husbands for support during the current lean times. In Kyoto's geisha districts, it is a long-standing tradition for geimaiko to retire when they marry. For that reason, many geiko are living alone to keep their jobs.

"We don't know when this situation will come to an end," said a geiko working in the Pontocho district who performs under the name Ichiwaka. "I become nervous when I'm all alone in my room with no lessons and parties to give."

A geiko named Momino, who heads an association for geiko working in Pontocho, said she also has a lot of concerns about life after the pandemic.

"I'm not sure whether we can present the same Kamogawa Odori performance as before because we have a lower number of geimaiko. Parties are all about opening up with each other and becoming close to one another by drinking together, but we may have to come up with new ways of entertaining guests," she said.