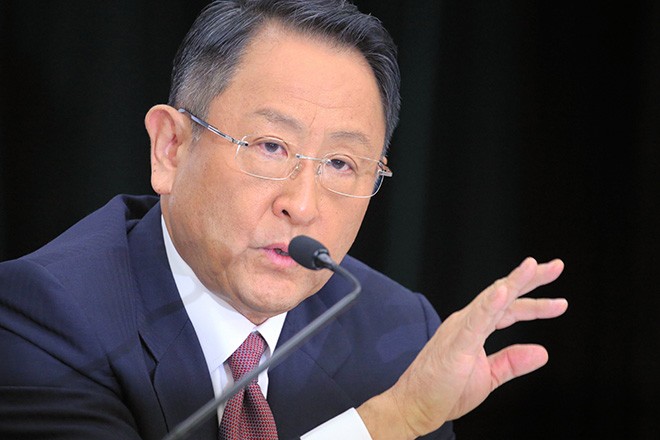 Akio Toyoda, president of Toyota Motor Corp., speaks during a news conference on its sales in Tokyo on May 8. (Kazuhiro Nagashima)

Toyota Motor Corp. has reached a settlement with the bereaved family of a 28-year-old employee after acknowledging that power harassment from his boss led to his suicide in 2017.

Toyota, in the settlement, recognized it failed to fulfill its obligations to protect the safety of its staff, including exercising the oversight responsibility over the employee’s superior, and agreed to pay the family an undisclosed amount, according to the automaker and Yoshihide Tachino, a lawyer representing the victim’s family.

The family had been demanding compensation and a host of measures to prevent a recurrence of similar incidents.

They decided to agree to the settlement, which was reached on April 7, after accepting a pledge by the company, which has a workforce of 74,000 employees, that it would reform its personnel system.

Toyota's president, Akio Toyoda, met with the family twice in Osaka, first in November 2019 after news outlets reported labor authorities’ decision that the employee’s suicide was work-related and again this April. He apologized to the family for the man's death.

As a preventive measure against power harassment, the company shifted from a merit-based personnel evaluation system to one that was personality-based in July 2020, earlier than initially planned.

Under the new system, known as "360-degree feedback," about 10,000 Toyota employees in managerial positions are subject to evaluations from more than 10 people around them such as their superiors, subordinates, and people concerned, in and out of the company.

Employees who are deemed unfit will not be promoted to serve as immediate managers of staff.

Toyota has also set up a section independent of other sections that employees who experience abuse can turn to.

Relatives and colleagues of victims can also report abuse to the section. After receiving a complaint, officials at the section are responsible for opening a detailed fact-finding inquiry into the case.

The company also established a consultation center where a psychiatrist will be available on call at all times.

According to Toyota’s in-house investigation and other sources, the employee joined the company in April 2015 after receiving a master’s degree from the University of Tokyo’s graduate school.

In March 2016, he was assigned to a job to design vehicles at the automaker’s headquarters in Toyota, Aichi Prefecture.

There, he was subjected to verbal abuse by his immediate boss, who told him, “You’d better die if you cannot give an explanation,” and called him “stupid" and "an idiot" repeatedly.

The employee took a leave from work in July 2016. Though he returned to work in October the same year, he took his own life in October 2017.

His family claimed workers’ compensation for his death in March 2019. In September the same year, the Toyota Labor Standards Inspections Office ruled that his death was a workplace accident. Labor authorities concluded that the employee developed adjustment disorder induced by his boss’s harassment.

The victim's relatives said they will continue to watch whether Toyota will transform itself.

“Akio Toyoda promised us to implement measures to prevent a recurrence when he made a condolence visit, and we will continue to pay attention,” one of the relatives said.

The company pledged to “push forward measures to stop harassment and continue efforts to build a more open corporate culture.”

Toyoda's subordinates apparently did not inform him that the cause of the employee’s death was power harassment and he only became aware of it in November 2019 through news reports that labor authorities had awarded his bereaved family compensation for his death.

He and the company's vice president then traveled to meet the employee’s family and Toyoda admitted his responsibility during the meeting.

He reportedly told the family that the reason no one at Toyota had informed him that the victim's death had resulted from power harassment was due to "the current corporate culture" there.

Toyoda promised the employee’s family that he would order a fresh investigation into the case and implement measures to prevent a recurrence.

(This article was written by Takashi Endo and Takuro Chiba.)