GOLF/ ‘She did it!’ Japanese thrilled with feats of Saso and Hataoka 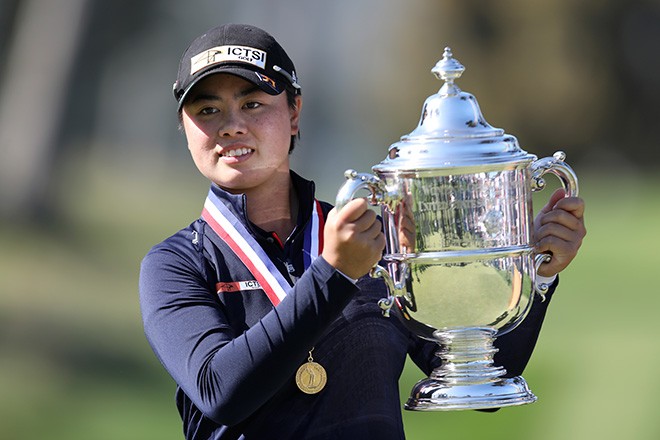 Yuka Saso celebrates her victory after the final round of the U.S. Women’s Open golf tournament at The Olympic Club in San Francisco on June 6. (AP Photo)

When Yuka Saso won the U.S. Women's Open golf tournament on June 6, her homeroom teacher back in Japan erupted in joy, as did her legions of fans across the nation.

“She did it!” marveled Tatsuo Yamanaka, 56, said after watching Saso match Inbee Park as the youngest winner of the prestigious U.S. Women’s Open at 19 years, 11 months, 17 days.

She was a member of the school’s golf club.

Saso, whose father is Japanese and mother is Filipino, has dual citizenship in Japan and the Philippines.

She lived for many years in the Philippines and initially struggled with writing in Japanese when she entered the high school, Yamanaka said.

But she improved with each passing year.

“I knew she would win a big tournament in the near future,” Yamanaka said. “But it came to fruition surprisingly soon, and I am surprised.”

“I hope she takes care of herself and wish her continuous success,” he said.

The victory that came in Japan on the morning of June 7 was extra special to the multitude of golf fans in Japan because of the playoff battle that matched the two young Japanese stars, Saso and Nasa Hataoka, 22.

Both have ties to Fuso Country Club in Kasama, Ibaraki Prefecture.

Saso was a junior member of the club from 2016 to 2020, visiting the course to practice once a year or so.

A representative of the company that operates the club said: “Nothing could be more joyous for the golf industry than (Saso) winning a major title as the youngest player. It offers big hope for junior players, especially.”

Hataoka, whose hometown is Kasama, visited the course in the off season a few years ago.

She posed for a photo with other golfers there and signed autographs for them, recalled Tatsuya Karibe, a 57-year-old assistant manager of the club.

He said Hataoka “was a cheerful and decent person, never shy with strangers.”

“She never let herself lose her spirit while playing. I think such mental strength has led her to this result,” Karibe said.

Hataoka was a member of the track and field club at Kasama city’s Iwama Junior High School. She was dedicated to playing golf at the time, but she also practiced hard for track and field activities.

Hirokazu Seki, 56, who coached the club, said he remembers Hataoka pledging, “I want to do my best both in golf and track and field.”

Seki said he was impressed by Hataoka practicing track and field until the last instant and making it to golf practice just in the nick of time.

Seki was checking closely and frequently on how Hataoka was doing in the U.S. Open.

Despite the playoff loss to Saso, Seki believes Hataoka “followed through with her original intentions.”

“The way she strives for her dream has never changed,” he said proudly.