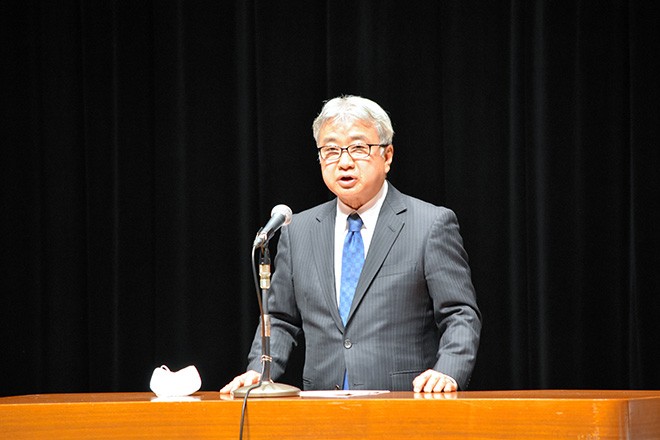 Yoshinobu Kosugi, president of Nippon Television Network Corp., apologizes for a discriminatory expression used in the broadcaster’s program to describe the Ainu people. This photo was taken in Sapporo on June 6. (Fumiko Yoshigaki)

SAPPORO--The president of Nippon Television Network Corp. apologized for a program in which a comedian used a derogatory word referring to Japan's indigenous Ainu ethnic minority of Hokkaido.

Yoshinobu Kosugi offered an apology at a regular general meeting of the Ainu Association of Hokkaido held in Sapporo on June 6.

“We sincerely apologize for airing an inappropriate and discriminatory expression that deeply hurt the Ainu people,” Kosugi said at the beginning of the meeting. “We’re ashamed to say it, but we lacked the understanding that the expression constitutes a direct discrimination against them.”

The president and other Nippon Television officials at the podium then bowed in apology.

In a Nippon Television news program that aired March 12, a comedian used the word “inu,” which means “dog” and was apparently intended as a pun on Ainu, when a documentary about an Ainu woman shown on the Hulu streaming video service was introduced.

After the broadcast, the Ainu Association of Hokkaido demanded that the broadcaster explain its view on the matter and why it decided to air the expression. The association also issued a joint statement with Hokkaido Governor Naomichi Suzuki to call for a better understanding of the history and culture of the Ainu.

Kosugi also said society had finally begun moving to improve the status of the Ainu people and to understand them better after a law to implement a package of measures to promote Ainu culture took effect in 2019.

“We are keenly aware of our responsibility for dampening the mood and reversing the progress by airing the expression,” he said.

The president also revealed that Nippon Television is preparing to air a program to show the results of an internal investigation into the cause of the problem.

As part of measures to prevent recurrences, the broadcaster gave all of its staff educational training on Ainu culture and history by inviting Hokkaido University researchers as instructors, Kosugi said.

“We want Nippon Television to steadily implement measures to prevent recurrences and respond to the matter appropriately in the long term,” said Masaru Ookawa, executive director of the Ainu Association of Hokkaido, after the general meeting. “We’ll cooperate with the broadcaster to help it air the correct history and culture of the Ainu.”

One man who attended the meeting said he felt Nippon Television was making a sincere effort to deal with the matter and expressed his hope that the broadcaster would follow through on what it pledged to do.