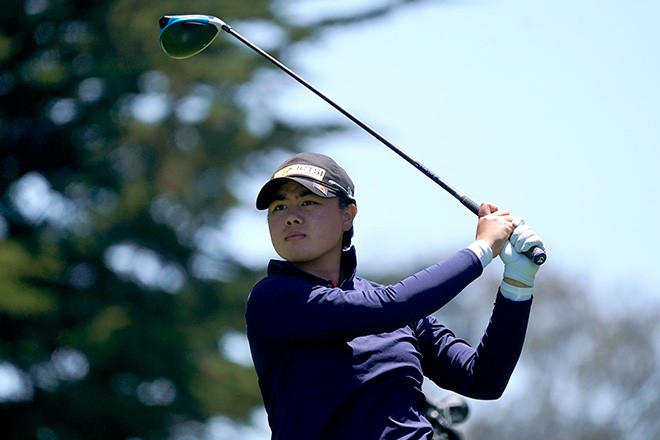 Yuka Saso, wearing a cap featuring the kanji character "katana" (sword), plays a shot during the final round of the U.S. Women's Open golf tournament on June 6. (AP Photo)

A kanji character on the brim of Yuka Saso's cap should have warned the rest of the field what they were up against in the final round of the U.S. Women's Open golf tournament on June 6.

The character “katana" (Japanese samurai sword), in orange, was sewn on her hat and remained visible throughout the tournament.

Saso, 19, persevered like a samurai, both resilient and opportunistic, in matching Inbee Park for being the youngest winner in U.S. Women's Open history.

The katana is the logo of Ginza Choshuya, a company that specializes in Japanese swords in Tokyo’s Chuo Ward, and is one of Saso's sponsors.

“Since the first time I met her, I knew she would win a world-class (tournament). But I didn’t know it would be this year,” Nobuhiko Fukami, 75, the president of Choshuya, said happily at the company’s headquarters in the capital’s Ginza district on the morning of June 7.

To Fukami, Saso seemed to struggle in her practice sessions during the off season. But once the season teed off, she quickly sharpened her competitiveness through tournament golf, he thought.

“Her mental strength through the round was incredible,” Fukami said, referring to the way she rebounded from a disastrous start on the early holes to overtake leader Lexi Thompson and force a playoff with Nasa Hataoka, who she defeated on the third playoff hole.

Fukami, who plays golf, too, said he met Saso through a person in the golf industry in December 2019.

Choshuya has sponsored Saso since February 2020, the first year of her professional career.

Fukami was impressed with Saso’s stable and repeating swing, modeled after PGA Tour star Rory McIlroy, and her ability to power the ball far down the fairway.

He knew that her talent was genuine and not one of a thin veneer that would crumble under pressure.

He was also fascinated by Saso’s “honest and cheerful” character, the way she “never gets hung up on minor details” and the way she dedicates herself to golf earnestly and seriously, he said.

Some said sponsoring a golfer would not offer much benefit for the company because there are not many samurai sword lovers who also are golf enthusiasts.

But Fukami decided to back Saso, who grew up in the Philippines and had difficulties finding a stable practice environment in Japan.

Choshuya mentioned on its website that it gifted a sword to Tiger Woods when the young golfing great came to Japan in 1998.

But Saso is the first professional golfer for the company to sponsor.

“I felt a connection,” he said.

For Fukami, the katana character represents his hope for her “to play each and every shot for keeps like a samurai warrior in a fight.”

He made the second stroke of the character a shape like the tip of a sword, and the tip angled to her own feet.

“When things are not going as planned, the tip of the sword should be turned to her own self and not to her enemies to make her way forward,” he explained the meaning of the logo.

When Fukami proposed having the katana character sewn on her cap, Saso said with a sparkle in her eyes, “That’s cool!”

Fukami chose not to contact Saso before the U.S. Open. But he received a message from Masakazu, which said, “With the heart of a sword and the heart of a warrior, (she) will gut it out.”

He was not lying.

Fukami hopes Saso will remain the sincere person he has known after winning the most prestigious championship in women's golf.

“I want her to showcase the ability she has honed and continue to shine on the world stage,” he said.