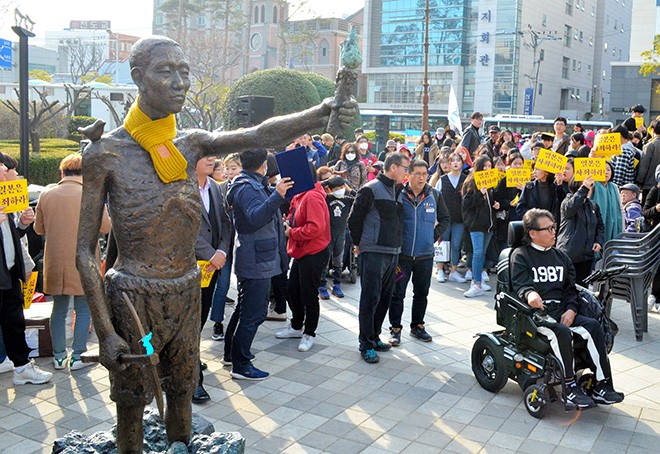 Protesters wave signs calling for Japan to apologize as they rally near a statue symbolizing wartime Korean laborers for Japanese companies near the Japanese Consulate in Busan on March 1, 2019. (Takuya Suzuki)

The plaintiffs filed the lawsuit against 17 Japanese companies in May 2015, claiming that they or their relatives were forced to work at factories on the main islands of Japan during World War II.

The plaintiffs dropped the case against one of the companies in May.

The defendants had argued that they are not liable for the damages in line with the stance taken by the Japanese government, which maintains that the 1965 bilateral agreement between Tokyo and Seoul settled all compensation claims by South Korea from World War II.

In a separate wartime labor compensation case, the South Korean Supreme Court in the fall of 2018 ordered Nippon Steel and Mitsubishi Heavy Industries to pay damages to the plaintiffs.

The ruling said wartime mobilization of Korean laborers to factories and other sites in Japan constitutes “inhumane and unlawful acts by Japanese companies connected to the Japanese government’s illegal colonial occupation and execution of a war of aggression.”