Ministry to require rearview cameras for new cars from 2022 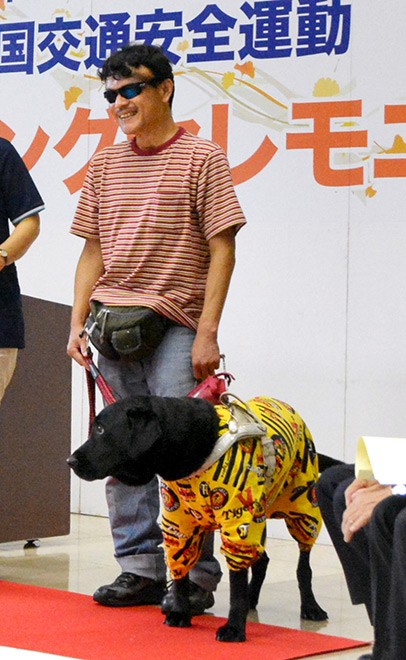 To reduce the thousands of accidents that occur annually when drivers are backing up their vehicles, the transport ministry will require automobile manufacturers to equip their new vehicles with rearview cameras from May 2022.

The ministry hopes the requirement will prevent tragedies that occur when a driver runs over a pedestrian while backing up a vehicle.

One such accident prompted the ministry to implement the change.

In October 2015, Eiji Yamahashi, 50, was hit by a dump truck backing up and died in Tokushima.

Yamahashi was visually impaired. A guide dog accompanying him also was killed.

Yamahashi was struck while he was on his way to work as the truck was backing up to enter a material yard.

His mother, Kazumi, 83, said Yamahashi was involved in a car accident when he was 19 and lost his eyesight.

He then started walking with a guide dog. He became actively involved in educational activities related to guide dogs, giving lectures at schools.

Yoshiharu Ueta, who heads a group to train guide dogs in Tokushima, said Yamahashi “had personal magnetism and played a leadership role for the visually impaired in the area.”

An alert system that warns pedestrians when the vehicle is backing up was installed on the dump truck. But it was nonoperative at the time of the accident.

“But elderly people, those in wheelchairs and children cannot immediately avoid a car coming at them," she said. "It is important that drivers thoroughly confirm safety.”

The Tokushima prefectural government in 2015 enacted an ordinance to require automobiles equipped with backup warning beepers to use them for the first time in the country.

But similar accidents have continued to occur.

At U.N.-related meetings, the central government has advocated the need for confirming safety when backing up a vehicle and has proposed to make installment of a backup safety camera and similar systems an international requirement.

In November 2020, each related country agreed.

Under the new proposed policy, all new automobiles, except motorcycles and special motor vehicles, will be subject to the requirement.

The equipment does not have to be a camera as long as it allows the driver to confirm rearview safety when backing up a vehicle.

A device that detects obstacles using ultrasonic sound, as well as a regular rearview mirror, will meet the safety requirement, the ministry said.

But the ministry requires such a camera and mirror to be able to check the rear area from 0.3 meter to 3.5 meters. For a detection device, the corresponding area should be from 0.2 meter to 1 meter.

Such a system has to be able to detect poles that are 0.8 meter high, considered the height of a child, standing to the rear of a vehicle.

The central government is expected to revise the safety standards based on the Road Trucking Vehicle Law as early as by the end of this week.

The revised law will be applied to new automobiles that are redesigned after May 2022.

New automobiles that remain the same as the current models will be subjected to the revised law after May 2024.

According to the Institute for Traffic Accident Research and Data Analysis, rearview cameras have become a popular safety feature in passenger vehicles.

In 2020, there were 16,400 fatal and injury accidents in which a driver of a four-wheel vehicle was a primary offender and the accident occurred as the vehicle was backing up. Fifty-six were fatal accidents.