Tojo’s ashes scattered over ocean with those of 6 others 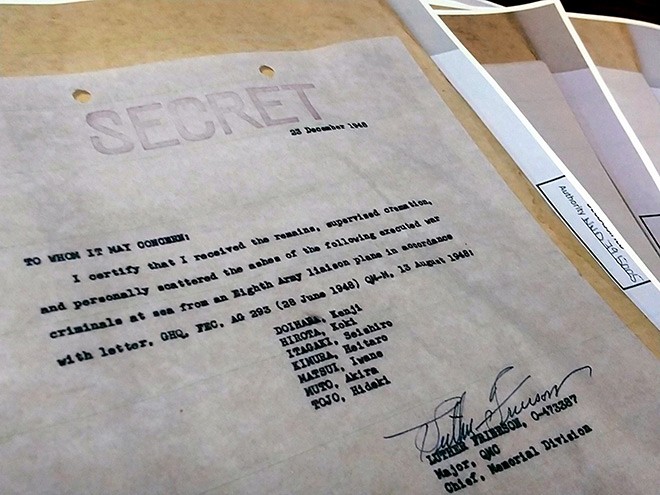 Copies of reports stating that the cremated remains of the seven Class-A war criminals had been scattered over the sea in accordance with GHQ instructions. The documents are housed at the U.S. National Archives and Records Administration headquartered in Washington, D.C. They were provided by Hiroaki Takazawa, a full-time lecturer at Nihon University. (Naotaka Fujita)

The ashes of wartime Prime Minister Hideki Tojo and six other Class-A war criminals executed in Tokyo on the same day in 1948 were scattered over the Pacific Ocean, according to declassified U.S. documents that clear up a decades-old mystery over final disposal of the remains.

The finding was made by Hiroaki Takazawa, a full-time lecturer at Tokyo's Nihon University and specialist on Japanese war criminals, at the U.S. National Archives and Records Administration headquartered in Washington, D.C.

Takazawa came across two documents in 2018 that provide details on the final handling of the remains following the convictions handed down by the International Military Tribunal for the Far East.

One document dated Dec. 23, 1948, the day of the executions, makes a brief mention of the ash scattering operation.

Another document dated Jan. 4, 1949, goes into more detail. Both of them were written by Maj. Luther Frierson of the Eighth U.S. Army based in Yokohama, who was in charge of the operation.

Frierson wrote that he was present at the early morning hangings in Sugamo Prison and accompanied the seven corpses when they were transferred to Yokohama by truck.

The remains were later cremated and placed in separate urns, which were then loaded onto a liaison plane used by the U.S. Eighth Army.

“We proceeded to a point approximately 30 miles (48 kilometers) over the Pacific Ocean east of Yokohama where I personally scattered the cremated remains over a wide area in accordance with letter GHQ, 13 August 1948,” Frierson wrote.

The letter from General Headquarters in Tokyo where Gen. Douglas MacArthur reigned as supreme commander of the Allied powers during the U.S. occupation, stated: “The remains of executed war criminals in the custody of the United States Army shall be cremated and the ashes disposed of secretly at sea.”

Frierson’s report noted that precautions were taken to ensure that news photographers did not get wind of the journey from Sugamo Prison to Yokohama.

The documents offer no explanation for GHQ's decision to scatter the ashes secretly at sea.

But William Sebald, the chief of the diplomatic section of GHQ, said in his book, “With MacArthur in Japan: A Personal History of the Occupation,” published by Asahi Shimbun Co., “The ashes were planned to be scattered around to prevent the graves of the executed war leaders from being deified in the future.”