New National Stadium blocked off from traffic as Games approach 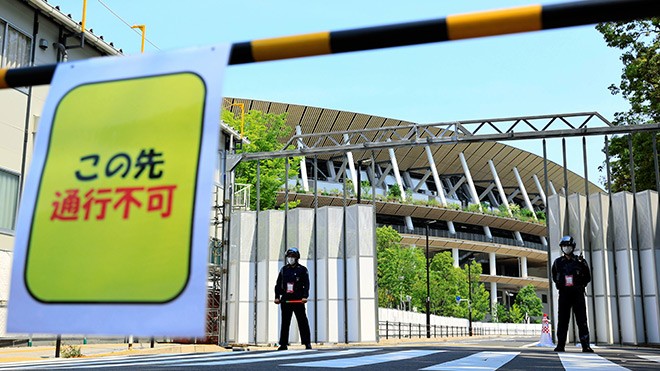 Large-scale traffic restrictions start around the New National Stadium in Tokyo’s Shinjuku Ward on June 8 ahead of the opening of the Tokyo Olympics and Paralympics. (Kazuhiro Nagashima)

Large-scale traffic restrictions began around the New National Stadium, a main venue for the 2020 Tokyo Olympics and Paralympics, on June 8, less than two months before the opening of the Games.

The restrictions, imposed on vehicles and pedestrians, will continue until Sept. 30, nearly a month after the Closing Ceremony for the Paralympics. Different sections of roads will be closed during the roughly three-month period.

The traffic restrictions started in the early hours at five locations near the stadium in Tokyo’s Shinjuku Ward. A gate measuring about 4 meters tall was installed between the stadium and nearby Meiji Jingu secondary stadium, blocking out traffic and pedestrians.

A company employee in her 40s who lives in the neighborhood didn’t know about the restrictions until she was stopped by a security guard when she was jogging in the area.

“I use this road when commuting to work, and so does my daughter when she goes to her school,” she said. “Three months is a long time.”

A male company employee, 44, who was cycling to work said, “It’s a bit of a shame that I have to take a detour since the area is beautiful, with a row of ginkgo trees.”

Sidewalks connecting the New National Stadium and the Meiji Memorial Picture Gallery, located nearby, and sidewalks on the stadium's east side will also be closed during the three months.

Work to build 3-meter-high security fences around areas that will become off limits to the public also began the same day to prepare for the Opening Ceremony for the Olympics on July 23.

Between 11 p.m. on June 19 and 5 a.m. on June 20, the Games’ organizing committee will conduct a test run of 150 buses that will carry athletes and staff attending the Opening and Closing ceremonies.

Areas near the New National Stadium and Aoyama-dori street will be closed to traffic during that period.