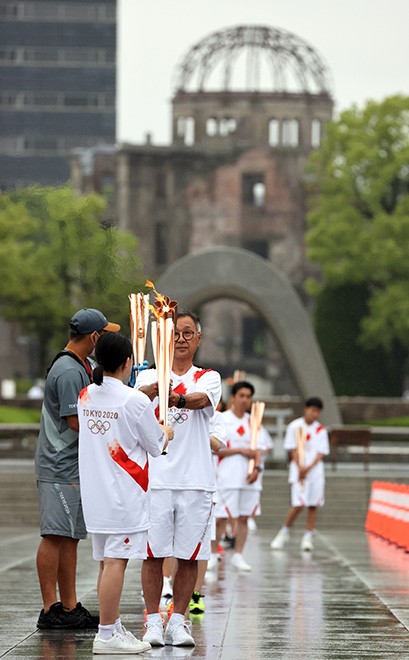 Torchbearers pass on the Olympic flame one by one in a ceremony called a “torch kiss” in Hiroshima on May 17. (Asahi Shimbun file photo)

A pleading voice from the leading car called to people on the roadside waiting to see the Olympic torch: “Please refrain from shouting. Clap your hands instead.”

This was a scene I witnessed in Niigata Prefecture last week.

The novel coronavirus pandemic is casting a pall on what would have been a festive occasion under normal circumstances.

In Toyama Prefecture, where the torch traveled before it arrived in Niigata, there were no spectators along the route.

A ceremony called a “torch kiss” was held in a public park, where torchbearers passed on the flame one by one on a specially designed stage.

Security was tight and a signboard proclaimed “Authorized Personnel Only.”

I was rewarded by the smiling faces of the torchbearers who had completed their big task, but it was sad that there was no one to congratulate them from the roadside.

The history of the Olympic torch relay began in 1936.

The flame ignited in Greece, the birthplace of the ancient Olympics, was transported to Nazi Germany and frenzied spectators lined the route.

The torch progresses, copiously spewing white smoke. Wishing to see the Olympic flame with their own eyes, citizens form massive human waves in Hiroshima and people lean out of windows in Tokyo. The torch relay was a festival in itself.

But uncertainties continue to rule the torch relay for the 2020 Olympics.

Last year, the Games themselves were postponed for one year, just two days before the start of the relay.

A year later, with COVID-19 cases still not under control, the organizers have been forced to scale down the relay around the nation.

Torch kiss or torch relay? On public roads or indoors? Not a few torchbearers have declined to participate.

The Olympic flame, which is traveling north in Akita Prefecture, is scheduled to arrive in Tokyo on July 9. At that time, will the Olympics still be a go or a no-go?

We can’t even see one month ahead.