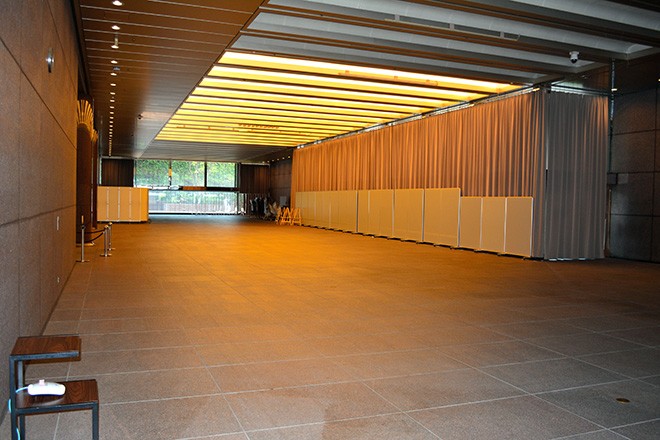 Itochu Corp. plans to use the first floor of its Tokyo headquarters as a workplace vaccination center. The company is located in the capital's Kita-Aoyama district. Photo taken June 8 (Masaki Hashida)

Companies across Japan rushed to apply to set up vaccination programs for employees at their workplaces after the government gave the green light June 8 for them to do so.

But many others wavered as they considered the practicalities of what would be involved.

Applications were submitted by companies and universities for approval to set up more than 500 sites at workplaces and campuses.

The program is scheduled to begin June 21.

Many companies are concerned about whether they can secure enough medical staff for the vaccinations and if it is OK to inoculate their employees ahead of elderly local residents.

Companies and universities can apply for the workplace vaccination program after they decide the procedures and rules to provide inoculations.

The government anticipates this will be done in three ways: vaccinating at clinics within companies; asking medical personnel to visit and provide vaccinations; and sending employees to medical institutions.

Companies and universities will receive vaccines, syringes and equipment to store the vials at low temperatures to start giving inoculations as early as June 21.

East Japan Railway Co. was one of the companies that applied for the program on June 8.

“To operate our railway services in a stable manner, it is essential that we start the vaccination rollout as early as possible,” Yuji Fukasawa, the president of JR East, said at a news conference.

The company said it will implement the program at two facilities in Tokyo and Sendai. It plans to finish the vaccination rollout this year for 22,000 employees, such as station staff, signal operators and maintenance workers.

The mobile carrier giant said that it had already secured the services of 40 or so doctors and nurses.

Sompo Japan said it had not yet determined the priority order for its employees.

“This is a race against the clock, so we should think about it while we are running,” said Kengo Sakurada, the president of the parent company Sompo Holdings Inc.

Many companies did not apply for the program, however.

Toyota Motor Corp., Honda Motor Co. and Nissan Motor Co., are planning to follow suit but did not apply on June 8.

“There are too many things to decide, so we failed to apply in time,” said a representative of a large corporation.