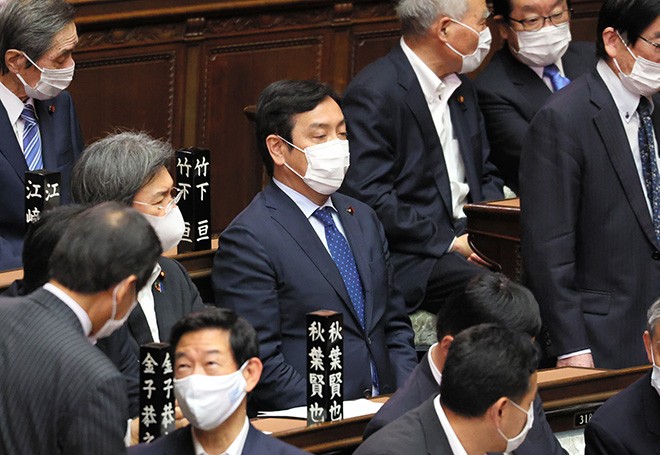 Ruling Liberal Democratic Party members have raised concerns that a summary indictment against a former economy minister could hurt the party’s chances in two key elections in the coming months.

Now, another scandal has engulfed Isshu Sugawara, a former LDP member who served as economy minister in 2019. He quit the party and the Lower House earlier this month.

Sugawara, 59, received a summary indictment on June 8 over suspected illegal donations given to voters in his constituency in Tokyo.

LDP legislators are worried that the Sugawara case could deliver a blow to party candidates running in the Tokyo metropolitan government assembly election scheduled for July.

“It could heavily impact the metropolitan government assembly election because (Sugawara) represented a Tokyo constituency,” said Hiroshige Seko, secretary-general of the LDP in the Upper House, at a June 8 news conference.

A Lower House election must be held by October. Although the big issues for that national poll will likely be the Tokyo Olympics and the COVID-19 situation in Japan, party members fear the corruption issue could sway some voters.

Sugawara is one of four scandal-hit LDP lawmakers who have resigned from the Diet over the past six months.

Anri Kawai was forced out of the Upper House after being found guilty earlier this year of vote-buying during her successful campaign in Hiroshima Prefecture for the 2019 Upper House election.

A re-election for the vacant Upper House seat was held in April, and the LDP candidate lost in what was considered a stronghold for the party.

Sugawara has admitted to the illegal act, according to prosecutors.

His civil rights will be suspended for five years, in principle, once the guilty verdict is finalized. But it is possible for the suspension to be shortened.

Prosecutors said Sugawara illegally donated 802,200 yen to 33 groups and 26 individuals in his electoral district between April 2018 and October 2019. The total included 288,600 yen that bought flowers for a funeral or was provided as condolence money that his aide distributed at funerals.

The rest was spent similarly for celebratory occasions, according to prosecutors.

Sugawara was first elected to the Lower House in 2003.

Although prosecutors acknowledged in June 2020 that his use of 300,000 yen for flowers and condolence money at a funeral was illegal, they dropped the case because they deemed his actions were not seriously malicious.

But they were forced to reopen the investigation after a Tokyo Committee for the Inquest Prosecution ruled in March that his actions warranted an indictment.

In the fresh investigation, prosecutors acknowledged that Sugawara had illicitly used an additional 500,000 yen and decided to issue a summary indictment against him, sources said.