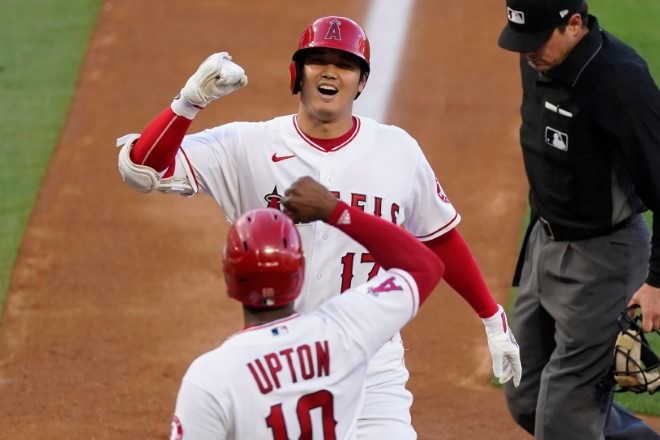 Los Angeles Angels designated hitter Shohei Ohtani (17) celebrates with Justin Upton (10) after they both scored off of a home run hit by Ohtani during the first inning of a baseball game on June 8 in Los Angeles. (AP Photo)

ANAHEIM, Calif.--Shohei Ohtani hit the longest homer of his major league career in the first inning, and the surging Los Angeles Angels pounded five homers in an 8-1 victory over the Kansas City Royals on Tuesday night.

Ohtani’s 17th homer of the season was a 470-foot shot deep into the outfield bleachers off Kansas City starter Kris Bubic (1-1). Ohtani then added a third-inning double that had an even higher exit velocity--112.6 mph off the bat, compared to 111.7 for his homer.

Andrew Heaney (4-3) allowed six hits and a run while pitching into the seventh inning of the Angels’ 10th win in 15 games.

Hanser Alberto had an RBI double in the seventh for the Royals, who have lost four straight.

Stassi drove Ohtani home with his fourth homer of the season to left in the third. The Angels’ veteran catcher and unlikely cleanup hitter delivered a two-run homer for the second straight night.

Iglesias added a solo shot in the fourth, his fifth homer of the season. Upton followed later in the inning with his fourth homer on the Angels’ six-game homestand, continuing his impressive surge since moving into the leadoff spot for the first time in his major league career in late May. Upton also has an extra-base hit in five consecutive games.

One night after Jackson Kowar threw three wild pitches and didn’t get out of the first inning in his major league debut, Bubic gave up four homers--twice as many as he had allowed in his first 34 innings combined this season.

Heaney came through with another strong performance in the 100th start of his major league career, striking out seven with two walks. Until Kansas City broke through in the seventh, Heaney extended his streak of 16 consecutive scoreless innings against Kansas City across three starts.

Alberto chased Heaney with a two-out double to left on the starter’s 109th pitch, but Steve Cishek retired Salvador Pérez on a bases-loaded groundout to end the seventh.

Although the Angels lost two of three at Kauffman Stadium in April, Los Angeles has won 13 of its last 18 meetings with the Royals since 2018, including the first two games of this series.

Kansas City’s Carlos Santana was called out for interference to end the third inning when he moved to avoid a pitch at his feet and accidentally got in Stassi’s way while the Angels catcher attempted to throw out Whit Merrifield stealing second.