Study finds why a mother can throw life away for children 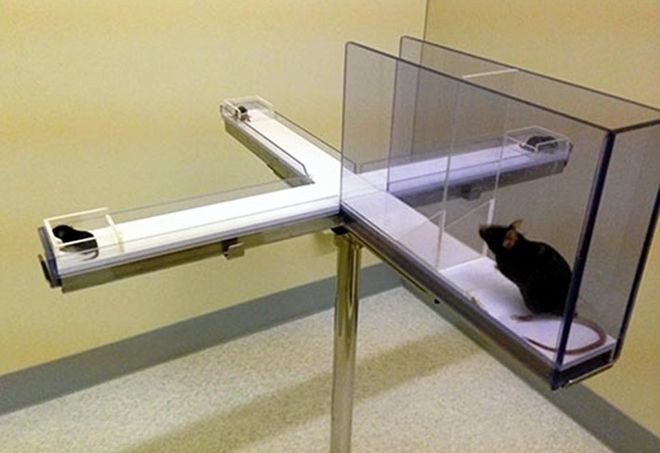 Researchers examine whether the mother mouse, right, will go to the rescue of her offspring placed at risk in a non-walled portion of a test layout. (Provided by the Riken research institute)

A mother's instinct to put her life at risk to keep her offspring out of harm's way is due to the way a woman's brain is wired, say researchers in Japan, citing studies on mice.

A team primarily from the Riken research institute discovered that a cerebral mechanism that inhibits a nerve cell’s activity renders it difficult for a parent mouse to react swiftly when its newborn are placed in situations of danger.

“The discovery offers an opportunity to better understand and support mothers who demonstrate less interest in caring properly for their children,” a team member said.

The researchers found that a nerve cell with calcitonin receptors works most actively in a section of the brain’s hypothalamus, the area that controls hormone secretion and other functions, among mother mice with young offspring.

The calcitonin receptor, which apparently rises eightfold in pregnant mice, exists on the surface of neurons to catch certain molecules outside cells to send signals inside the cells.

Rendering the nerve cell with the receptor in mother mice non-functional resulted in a drastically reduced likelihood of breast-feeding and ferrying their offspring with them.

The tendency led to only 20 percent of baby mice being able to survive for a single day. This compared with the survival ratio of 80 percent for young mice whose mothers’ nerve cell functions were not suppressed.

To ascertain how the receptor functions in detail, the team created a cross-shaped layout comprised of four narrow paths 40 centimeters higher than ground level. As a precaution, walls were set up on both sides of one of the four paths to prevent the rodents from falling.

Mice are prone to remain in walled in areas. But when offspring were placed in non-walled routes, non-pregnant mice rarely went to the rescue. Mother mice, however, put their lives on the line to aid baby mice in trouble.

Mother mice with half the number of receptors on the nerve cell took nearly twice the time to rescue offspring and steer them to safety. But mothers with fewer calcitonin receptors showed no problems caring for their offspring in cages.

Based on the results, the team concluded that the receptor likely plays a part in motherhood, allowing mother mice to maintain their morale for child rearing even when the lives of their youngsters are at risk.

In 2012, the research team found that mice with a lowered function of a specific hypothalamic region were unable to care properly for their offspring.

Seeing as there are seven or more types of nerve cell in the area, the cell essential for child rearing had been unclear before the latest study.

As the cerebral section in mice has a relatively similar structure to that of other mammals, the basic brain mechanism associated with child care is likely shared across the animal kingdom, the researchers said.

The team has already started studies using monkeys, a species that is genetically far closer to humans.

“The cerebral mechanism for child rearing has not received so much attention in neuroscience, so we are forging ahead with our study,” said Kumi Kuroda, a senior Riken official.