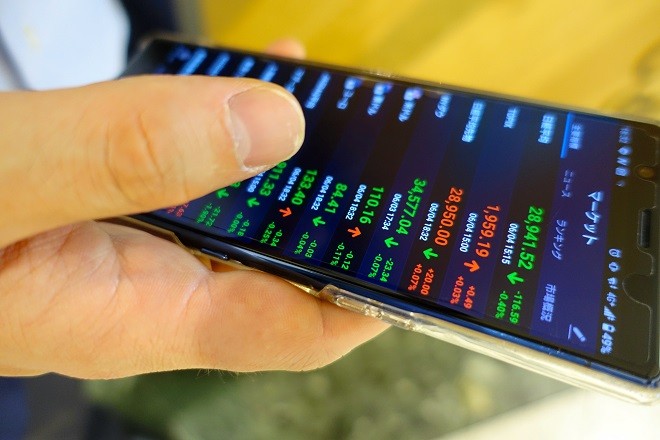 The man in his 30s who opened a Junior NISA account under his son’s name checks stock prices in Tokyo on June 5. (Shuhei Shibata)

A change in a little-used long-term investment program that is ending soon has led to a surge in new accounts apparently opened by people seeking quick, tax-free earnings.

The Financial Services Agency started the Junior NISA system in 2016 to encourage parents to stably manage their assets while their children are growing up so that the returns can be spent on future education and other expenses.

The small-sum investment system gives tax exemptions on profits from investments made in special-purpose accounts opened in the name of an infant.

But just four years after it started, Japan decided in late 2019 to scrap Junior NISA at the end of 2023, because, as FSA officials put it, the system had “fewer users than expected.”

In deciding to end the program, the FSA also eased the rules for tax exemptions.

Currently, the exemptions are applicable only if no money has been withdrawn from the account before its holder is 18 years old. Profits are taxed if any withdrawal is made before the holder turns 18.

In 2024 and later, however, when the system no longer exists, profits will remain tax-free even if money is withdrawn, irrespective of the account holder’s age.

“That has increased the advantage of the system,” said a management company executive.

Since the FSA’s announcement, the number of new accounts increased from about 10,000 per quarter to more than 30,000.

There were concerns the easing of the exemption rules could encourage short-term transactions with the accounts, contrary to the system’s goal of long-term investments. The FSA decided, however, that it would be unreasonable to retain the condition when the system itself is ending.

Even when the Junior NISA program started, some officials in the Finance Ministry, which oversees the tax system, said the tax-free framework could give rise to “money games.”

A man in his 30s who works for a financial institution in Tokyo opened a Junior NISA account four years ago under the name of his preschool son. The father’s initial aim was to build assets in preparation for his son’s entry into a university, and he planned to buy stocks of big-name companies and hold them over the long term.

He said he was pleased that any profit gained from stocks and investment trusts would be exempt from the standard tax of around 20 percent if they remained in the account until his son turned 18 years old.

He recently checked the balance of the Junior NISA account on a smartphone app after he returned home. It showed about 1.19 million yen ($10,900), including unrealized profit.

His investment plans changed from the FSA’s intentions when he saw a rise in the price of his first buy, stocks of a major trading house. He had spent nearly 800,000 yen for those shares.

The opportunity to make a quick profit was too good to pass up.

He sold the stocks after holding them for only about 10 months and earned about 70,000 yen in profit.

“That is when I got a taste of success,” the man said.

The man knows, of course, that he can suffer losses at any time, but his profits have continued to grow.

“This account is for me to pursue small short-term profits rather than to wait patiently for the prices to rise,” he said. “I know, of course, that that goes against the primary purpose of the system.”

A list of the most-traded stocks through Junior NISA accounts in 2020, compiled by SBI Securities Co., contained many high-risk issues, which are seen as symbols of short-term transactions.

They included a number of leveraged instruments, which are generally believed to be unsuited for long-term possession, as well as low-price stocks susceptible to wild price fluctuations.

They are popular among investors because they “offer opportunities to gain large profit margins from slight price variations,” a management company official explained.

‘COULD HAVE BEEN DESIGNED BETTER’

The Junior NISA system was established under the government’s slogan of moving “from savings to investments” to encourage the practice of asset formation.

The FSA is promoting asset formation through long-term, stable management instead of gambling on short-term transactions.

Emphasis is placed on building assets from young ages.

Senior high school curriculum guidelines to take effect in fiscal 2022 will, for the first time, encourage teachers to explain the idea of asset formation during home economics classes.

The FSA touted the Junior NISA system as aimed principally at asset formation for the future of children and grandchildren. The framework, however, has been a “letdown” of sorts.

“We could have designed the system better,” one FSA official told The Asahi Shimbun.

Specifically, the Junior NISA system gives tax exemptions for dividend payments and profits gained from the sale of up to 800,000 yen’s worth of new investments made every year in accounts of individuals aged between 0 and 19.

The special accounts should be administered and managed by parents, guardians or other relatives of the account holders.

The framework is understood as a “young citizens’ version” of the NISA system (without the Junior qualifier), which also gives tax exemptions to dividends as well as profits on the sale of small-sum investments.