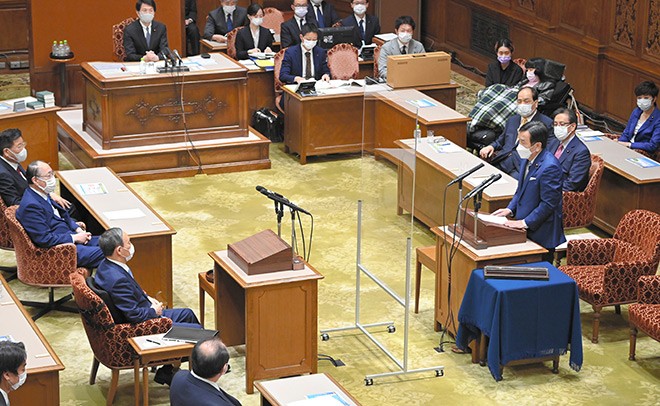 Prime Minister Yoshihide Suga said he aims to finish inoculating all citizens who want to be vaccinated against the novel coronavirus by October or November to contain the COVID-19 pandemic.

He announced the goal June 9 during his first one-on-one Diet debate with leaders of the opposition camp. It was the first to be held in two years.

The debate centered on steps the government is taking to bring the COVID-19 pandemic under control and whether Japan should press ahead with the Olympic Games scheduled to start in late July.

Yukio Edano, leader of the main opposition Constitutional Democratic Party of Japan, pointed out that the current COVID-19 state of emergency was repeatedly extended due to a resurgence of infections.

“It was too early to lift the previous emergency declaration in March,” Edano told Suga. “A fifth wave of infections must be prevented at all costs. You should present clear and strict criteria (for lifting the state of emergency).”

Suga responded that progress in the vaccination program holds the key to controlling infections, noting that nearly 20 million doses had been administered already.

“I want to finish inoculating all those who need or want to be vaccinated by October or November,” he said.

With regard to the Olympics, Suga vowed that the government will take all possible steps to prevent a spread of infections by capping the number of athletes and staff who attend and monitoring the movements of the foreign media using GPS devices.

“I want to show that the world can overcome the coronavirus by fighting as one,” he said, renewing his resolve to stage the sports extravaganza, already delayed by one year due to the pandemic.

However, Suga rejected opposition parties’ demands for a supplementary budget to fund anti-virus measures and an extension of the ordinary session of the Diet that ends June 16.

In response, the CDP, the Japanese Communist Party, the Democratic Party for the People and the Social Democratic Party began preparing to submit a no-confidence motion against the Suga Cabinet.