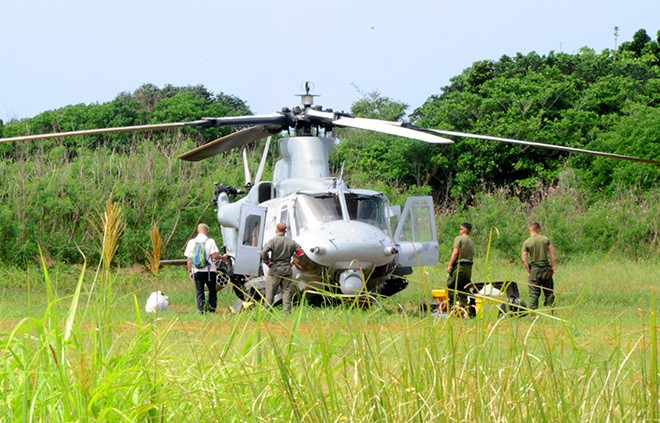 NAHA--U.S. military authorities rejected a request from the prefectural government in Okinawa to suspend flights of the type of helicopter that made an emergency landing last week.

Okinawa officials called June 9 for a suspension of flights until the cause of the June 2 incident can be determined.

However, the U.S. military insisted that the problem was not one that affected all helicopters of the same model, prefectural officials said.

The helicopter in question made an emergency landing near a private home on Tsukenjima island, part of the city of Uruma, located in the middle of Okinawa’s main island.

The aircraft was a multipurpose UH1Y helicopter based at U.S. Marine Corps Air Station Futenma in Ginowan city and on a night-time training exercise.

Masaru Kinjo, director-general of the Executive Office of the Governor, met with Neil Owens, director of the Marine Corps Installation Pacific Government and External Affairs, to register a protest at the U.S. Marine Corps Camp Foster, which spans Kitanakagusuku village and nearby municipalities.

According to Kinjo, Owens apologized for creating anxiety among residents and explained the problem was due to a sensor that monitors engine rotations.

But he said the U.S. military will not suspend its training.

“When problems occur with a helicopter, surely it is necessary to check all the other ones of the same model,” Kinjo told reporters after the meeting.

The incident occurred around 11 p.m., which prefectural government officials pointed out was a violation of a bilateral noise-prevention agreement regarding U.S. military activity in Japan.

In 1996, Tokyo and Washington agreed to restrict U.S. military flights from 10 p.m. through 6 a.m. to lighten the burden Okinawa faces in hosting 70 percent of all U.S. military facilities in Japan.

Owens said the U.S. military is operating in line with the agreement's provisions.

Okinawa Prefecture has been the site of repeated incidents involving emergency landings or crashes of helicopters and aircraft based at Futenma.

“(The U.S. military) says it does proper maintenance and inspection, but (accidents) have been occurring in reality,” Kinjo told reporters. “There is a need to speak in the strongest possible terms to prevent accidents from recurring and determine their causes.”