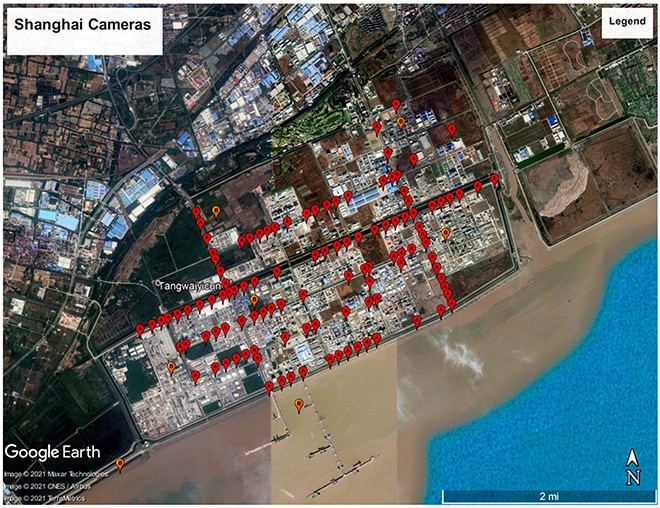 A map of the Jinshan district of Shanghai shows the location of the many surveillance cameras installed there. (Provided by Internet 2.0)

Nearly 900 Japanese nationals are on a list of 90,000 or so individuals whom Shanghai municipal authorities broadly regard as “Uighur terrorists,” according to an Australian cybersecurity company that analyzed the data.

Many of the 895 Japanese nationals are simply businessmen who worked in Shanghai or made frequent business trips to the bustling city.

The information was obtained by Internet 2.0, a cybersecurity firm founded by Robert Potter, who at one time served as a cybersecurity adviser to the governments of the United States, Australia and Canada.

Internet 2.0 concluded that the data it examined constitutes only one small part of the mass surveillance of local residents and visitors by the Shanghai local government.

The data, which was stored in the Cloud operated by a Shanghai telecommunications company, was obtained by Internet 2.0 in late 2020.

Under the broad category of Uighur terrorists, various lists cropped up in which personal data was distributed, the company said.

One was a black list put together by the local science and technology bureau on 10,000 or so people assumed to be Chinese nationals. The list contained their names and personal ID numbers.

Of that number, about 7,600 were Uighurs, a minority group accused by China of waging a violent campaign for an independent state that says it is a victim of Chinese suppression and aggression.

The list also included testimony given in response to questioning by local authorities from 7,088 individuals. Some of those on the list also had specific reasons included on why they required special surveillance. Of the total, 2,017 were described as Uighurs who opened new internet sites in Shanghai.

Another list was apparently compiled by local immigration control authorities as it contained passport information on about 10,000 individuals who used the two main Shanghai airports of Hongqiao and Pudong in 2018 and 2020.

About half of the individuals are foreign nationals, including 895 Japanese, the largest figure for one nation. There were also 697 Americans and 673 South Koreans on the list.

All the information on the Japanese nationals were passed to Tokyo by Internet 2.0.

A government source acknowledged that all the Japanese do exist, adding that “many were employees working for major trading companies, electrical equipment and fiber manufacturers.”

The source told The Asahi Shimbun that the government’s own analysis would proceed once it had exchanged views with officials of other nations with citizens on the list.

An executive of a Japanese electrical equipment company whose name was on the list confirmed the data found was accurate. The executive worked at an affiliated company based in Shanghai at that time and made frequent business trips to and from Japan.

“I never suspected I was being checked thoroughly or followed after entering Shanghai,” the executive said. “It is frightening to think I was being monitored without my knowledge.”

Other lists included criminal records on about 10,000 Chinese as well as the names and personal ID numbers of 60,000 or so employees working for 976 companies that handle explosives and chemical materials.

There was also video data of pedestrians and license plates taken by surveillance cameras in the vicinity of the Jinshan port district of Shanghai.

“Because local authorities can confirm the portrait contained in the personal ID from the ID number, the activities of individuals can be monitored around the clock by using the countless number of surveillance cameras with facial recognition functions installed in the city,” noted Akira Igata, the executive director of Tama University’s Center for Rule-making Strategies. Igata is also a specialist in human rights issues.