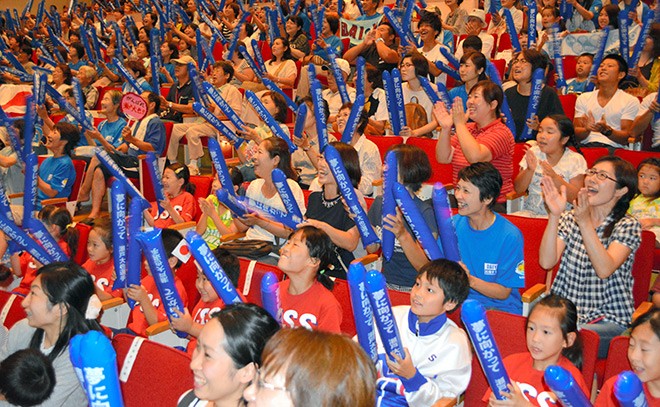 With the start of the Tokyo Olympics six weeks away, public viewing events are falling by the wayside due to COVID-19 concerns, with gatherings in two neighboring prefectures and at the tallest structure in the capital called off.

Chiba Governor Toshihito Kumagai on June 10 briefed reporters on the decision to scrap events in his prefecture.

“The purpose of holding the viewing events was to share the inspiration and excitement of the Games and promote the appeal of the prefecture,” he said.

“But in the midst of novel coronavirus infections spreading, such a purpose will be unachievable. From the standpoint of controlling the costs, I thought a decision needed to be made quickly.”

According to the prefectural government, public viewing events were scheduled for Makuhari Kaihin Park in Chiba’s Mihama Ward on July 31 and Aug. 1 for Olympic events, as well as on Aug. 28 and 29 for Paralympic events.

As many as 3,000 people were expected to watch the Games live on a large LCD screen, the city said.

The prefectural government budgeted 90 million yen ($822,000) for staging the events.

Ono said at a news conference on June 7 that the public viewing events that the prefectural government had planned were called off.

“It is very sad, but I made the decision as the host,” Ono said.

Viewing events were scheduled at Sonic City in Saitama’s Omiya Ward from July 31 to Aug. 8, as well as at a public sports complex in the city of Asaka from Aug. 28 to Sept. 5.

The prefectural government estimated about 11,000 visitors would be drawn to the two sites.

Tokyo’s Sumida Ward on June 8 announced the cancellation of viewing events scheduled at Tokyo Skytree Town, the tallest structure in Japan, at 634 meters.

The ward office said it made the decision to “prioritize the residents’ health and safety.”

Shigeru Omi, the head of a government pandemic-response panel, on June 9 said in a Lower House committee meeting that public viewing events should not be held.

“There are other ways to cheer on (the athletes),” Omi said, adding that through TV and other means he hopes people find a new way of enjoying the Games together.

Facing strong criticism, the Tokyo metropolitan government on June 1 canceled plans to use Yoyogi Park for viewing events during the Olympics, but not for five other locations.

(This article was compiled from reports written by Yoshihiro Sakai and Yuki Kawano.)