What a scream: Mandrake sketch by Kumagusu on show for 1st time 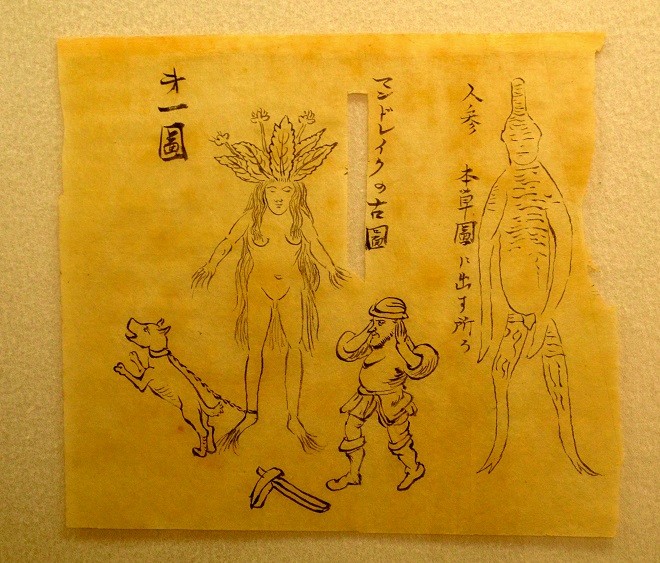 This drawing of the mandrake, seen here in Shirahama, Wakayama Prefecture, on May 26, is attributed to naturalist Minakata Kumagusu. (Shinichi Katsube)

SHIRAHAMA, Wakayama Prefecture--A sketch of a mandrake by Minakata Kumagusu (1867-1941) on show for the first time reflects the legend that the plant’s roots emit a deadly scream when it is pulled from the ground that kills anyone who hears it.

The work by the world-renowned naturalist depicting a dog ripping out a human-shaped mandrake root and a man covering his ears with his hands is being exhibited at the Minakata Kumagusu Museum in Shirahama, Wakayama Prefecture.

The sketch was discovered between pages of the “Nihon Oyobi Nihonjin” (Japan and the Japanese) magazine’s 631st issue, published in 1914, museum officials said.

The native son of this western prefecture was apparently quite taken with the mandrake, a plant species that has generated a variety of legends since olden times.

The mandrake appears in the film “Harry Potter and the Chamber of Secrets” as a plant with magical power. Also called the mandragora, the plant is indigenous to the Mediterranean region and elsewhere and belongs to the nightshade family.

The mandrake also makes an appearance in Greek mythology and the Old Testament, and is used as a medicinal herb. It contains ingredients that can induce auditory and other hallucinations, among other effects.

The sketch is part of a special exhibition titled “magazines collected by Kumagusu.”

The 50 or so articles that Kumagusu contributed to the British science journal Nature include an 1895 treatise on the mandrake.

Kumagusu died on Dec. 29, 1941.The special exhibition was planned to commemorate the 80th anniversary of his death.

Kumagusu contributed a large number of articles not only to foreign journals, but also to magazines published in Japan. The 30 or so exhibits are centered on magazines to which he contributed Japanese-language articles and those that he collected.

The show also focuses on men of letters who had interactions with Kumagusu, including folklorist Kunio Yanagita (1875-1962) and haiku poet Kawahigashi Hekigoto (1873-1937), and touches on the movement of the 1900s and 1910s against the consolidation of Shinto shrines, to which Kumagusu was committed.

In addition to Kumagusu’s mandrake, the exhibition also features his charming sketch of a cat and old photo postcards to cater to the tastes of both grown-up visitors and children.

The special exhibition runs through Sept. 1. Admission is 600 yen ($5.48) for adults and 300 yen for elementary and junior high school students.

The museum is normally closed on Thursdays. It will also be closed from June 28 through June 30 and is open every day from July 20 through Aug. 31.