VOX POPULI: Even belugas are offended when their messages go unanswered 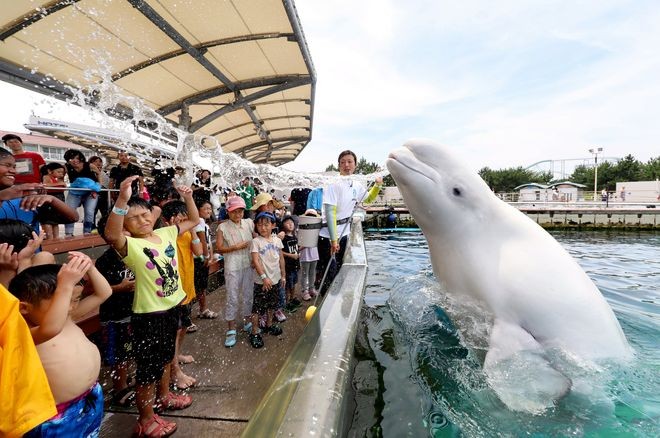 Every time I am "left on read" after sending someone a message, I feel put off and can't help checking my smartphone repeatedly for their response.

I thought this feeling of annoyance was unique to humans, but I was wrong. Apparently, beluga whales get it, too.

Recent research revealed that when belugas exchange calls with their pod mates but are ignored, they don't wait silently. They demand a response.

A team of scientists led by Tadamichi Morisaka, 44, an associate professor at Mie University, installed an audio recorder in an aquarium tank to study the sounds made by belugas.

When belugas called to their mates--uttering a sound like a heavy door creaking--but received no response after one second, the probability of their pressing for a response by repeating the same call was quite high. It was as if they were saying, "Hey, can't you at least just respond?"

"Animals like dolphins, monkeys and whales, which are social by nature and use their voices extensively, feel unstable when their calls aren't reciprocated," noted Morisaka.

His research paper, which explained the existence of the left on read phenomenon in the world of beluga whales, was published in a mammalogy magazine.

According to British anthropologist and evolutionary psychologist Robin Dunbar, human conversations are functionally similar to mutual grooming by monkeys.

For humans, striking up a conversation with someone signals their interest in that person and their desire to establish an amicable relationship. Consider it as a form of "remote grooming," if you will.

What is important is the act itself, not necessarily what is said, according to Dunbar.

I heard the voices of beluga whales in Morisaka's lab. From high-pitched squeaks to sounds akin to the creaking of a door, they covered a broad range and varied in tempo.

Learning from the richness of their conversations, I think I will try to be a bit better in responding to text messages.