Quasi-emergency to end in Gunma, Ishikawa and Kumamoto 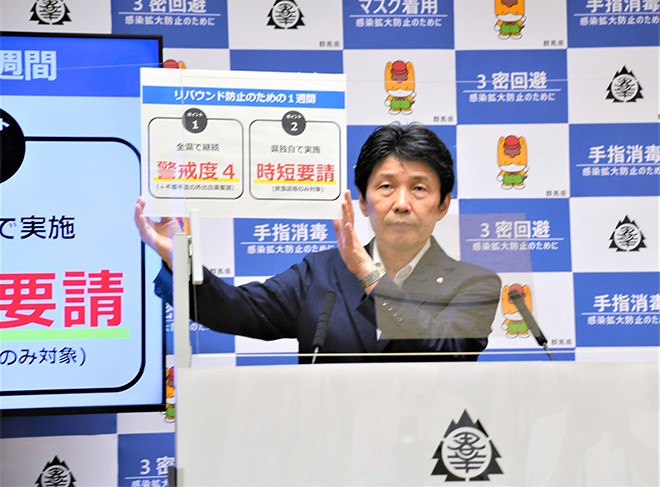 Gunma Governor Ichita Yamamoto talks about his plan after the pre-emergency measures are lifted at the prefectural government office on June 10. (Kaho Matsuda)

Quasi-emergency measures will be lifted for Gunma, Ishikawa and Kumamoto prefectures after June 13 although authorities will ask restaurants and bars in some areas to continue to close earlier.

The government’s task force team on June 10 approved the lifting of the pre-emergency measures for the three prefectures as COVID-19 cases continue falling there.

The three prefectures will not ask eating and drinking establishments to refrain from serving alcohol, but will continue to request those in many areas to reduce their operating hours.

At a task force meeting on June 10, Gunma prefectural officials decided to maintain the highest level of the local alert system from June 14 to 20. It will also continue to ask all restaurants and bars in the prefecture to close by 8 p.m.

Under the quasi-emergency measures, eating and drinking establishments in 10 municipalities, including Maebashi and Takasaki cities, have been asked not to serve alcohol the entire day. From June 14, they will be able to offer alcoholic beverages until 7 p.m.

At a meeting on June 9, Ishikawa Governor Masanori Tanimoto told people associated with a shopping street in Kanazawa city that he knows the quasi-emergency measures have been difficult for businesses.

“I think that they have been extremely tough, but the infection situation is improving,” Tanimoto said.

The governor has been asking restaurants and bars in the prefecture to close by 9 p.m., and requesting those in Kanazawa city to close by 8 p.m. and to stop serving alcohol as the prefecture’s capital has recorded nearly half of the local infection cases.

But after the quasi-emergency measures are lifted, the prefectural government will not ask restaurants and bars in Kanazawa city to stop offering alcoholic beverages. It will also not urge these establishments in the prefecture, except in Kanazawa city, to close early.

At a news conference on June 10, Kumamoto Governor Ikuo Kabashima announced his plan to ask only eating and drinking establishments that serve alcohol in Kumamoto city to close by 9 p.m. until June 30. Those establishments have been asked to close by 8 p.m.

The prefectural government will stop asking restaurants and bars in Kumamoto city to refrain from serving alcohol and cancel the request for those in the prefecture, except Kumamoto city, to close by 9 p.m. after the measures end on June 13.

“If anti-coronavirus measures are relaxed and social and economic activities become more active, then infections could spread again,” Kabashima warned.

(This article was written by Kaho Matsuda, Shinkai Kawabe and Hideki Ito.)