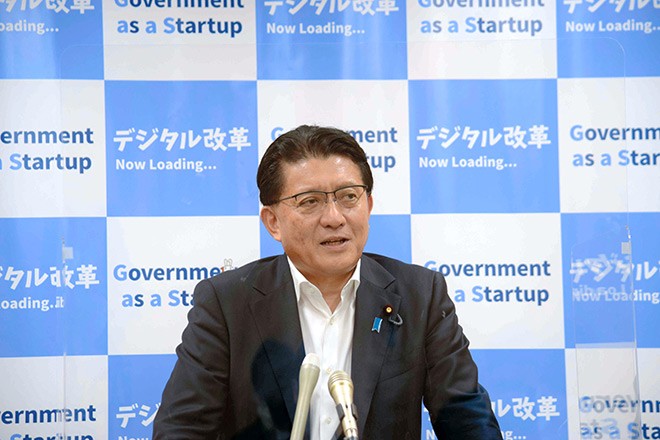 A state minister apologized for urging his subordinates to use “threats” against NEC Corp. to get the electronics giant to accept reduced pay for developing an app for the Tokyo Olympics and Paralympics.

Takuya Hirai, the state minister in charge of digital transformation, met with reporters on June 11 and admitted that he went overboard.

An NEC-led consortium was the only one that placed a bid in January to develop the app, which government officials wanted to use to keep tabs on the health of foreign tourists and those connected with the Tokyo Olympics and Paralympics.

A contract was signed with the central government for about 7.3 billion yen ($66.7 million) to develop the app according to government specifications.

But after the decision was made to ban spectators from abroad from attending the Olympics because of the COVID-19 pandemic, the functions of the app were reviewed.

On May 31, a new contract was signed that reduced the pay to the consortium to 3.8 billion yen.

The Asahi Shimbun obtained audio data of a teleconference held in early April between Hirai and subordinates in the Cabinet Secretariat section in charge of information technology strategy.

Regarding discussions with NEC officials about reducing the contract amount, Hirai was heard saying, “I would die before placing orders with NEC (after the Olympics).”

He added that the company would be left out to dry if it complained about the Olympic project.

Hirai also mentioned the name of the NEC chairman and told his subordinates to use threats against him to win an agreement on a lower contract amount.

At a news conference on June 1, Hirai said the initial contract with NEC had been revoked because development and operation of the facial recognition function the company was working on was no longer needed.

But by that time, NEC was close to completing the development work. Lawmakers asked questions in the Diet about the reduction in the contract amount.

In response to questions from the Asahi, Hirai said he gave the instructions because he wanted the subordinates to realize they should take a strong stance because they were handling taxpayers’ money.

Hirai added that he felt pressure from opposition lawmakers in the Diet who said the amount to be paid to NEC was too high.

NEC issued a statement saying it went along with the new amount as a partner in the development project.

However, Masaki Hoshino, a lawyer who once worked in the Board of Audit, said an investigation was needed to determine if Hirai’s statements affected the revised contract.

Hoshino said having the government apply inappropriate pressure to seek a reduction in the contract amount constituted a form of extortion based on the dominant bargaining position of the government.

He also raised doubts about the rapid manner in which the contract was initially signed after the second state of emergency for the novel coronavirus pandemic was declared.

Hoshino added that Hirai’s comments only added to the suspicions regarding the need for developing the app.

(This article was written by Eiji Zakoda and Shin Matsuura.)