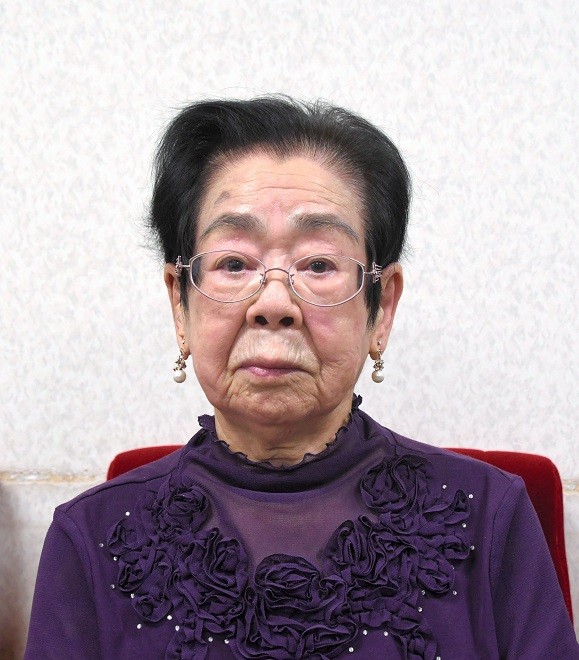 Nobuko Oka, who will deliver this year’s peace declaration on behalf of hibakusha at the Aug. 9 Nagasaki peace memorial event, is pictured in Nagasaki on June 2. (Yuichiro Yoneda)

NAGASAKI--At the age of 92, wartime student nurse Nobuko Oka will be the oldest hibakusha yet to declare the vow for peace at this year's annual ceremony to mark the Aug. 9, 1945, atomic bombing of Nagasaki.

“I want to continue calling (for peace) to the end, as I believe that is the mission imposed on those of us left behind,” said Oka at a June 2 news conference held after she was selected to represent the dwindling number of atomic bomb survivors.

Oka, a resident of Nagasaki, will deliver her speech at the municipality’s peace memorial on the 76th anniversary of the attack that killed more than 70,000 people.

When the atomic bomb detonated over the city in southern Japan, three days after the Hiroshima bombing, Oka was 16 years old and studying at a nurses’ school in Osaka Prefecture.

As fate would have it, she had temporarily returned to her family’s home in Nagasaki’s Sumiyoshimachi district because Osaka was being targeted for intense air raid activity by U.S. bombers.

The family residence was within 1.8 kilometers of the ground zero blast center. Oka's left arm and thigh were lacerated by shards of glass in the explosion.

Despite her injuries, Oka was mobilized to help wounded people at an aid station on the site of the nearby Shinkozen school.

Oka concentrated on treating “patients in front of me” who had been rushed to the aid station. No medicines were available, so “offering sufficient medical care was impossible,” she recalled.

Her tasks included washing away maggots in the wounds of a patient’s back and transferring corpses.

After the war ended, Oka rarely talked about her wartime experiences, even with her daughter, because “those who are not hibakusha would never understand what we hibakusha had to say.”

The turning point came seven or so years ago, after a niece asked her to open up about her experiences. She was also interviewed by a newspaper around that time as well.

Oka gradually began sharing her story in the belief that doing so is the mission of survivors. She has even given a lecture on the atomic bombing at a college in the city.

In January this year, the Treaty on the Prohibition of Nuclear Weapons that defines nuclear arms as inhumane and illegal went into effect.

Asked by a reporter at a news conference what she felt about Tokyo’s decision not to ratify the pact, Oka could hardly contain her anger.

“The voices of us victims apparently have not reached them,” she said.

Hibakusha began giving speeches at peace memorial events in 1970. Though five survivors’ groups in Nagasaki recommended speakers in rotation, the representative has been chosen from the public since 2017.

This year, 20 applicants came forward from both in and outside Nagasaki Prefecture.

Oka applied to deliver the peace declaration because she wanted to make some form of contribution to the commemorative service.

She never imagined she would be allowed to attend the event and started crying when she heard she had been selected as this year's representative.

Susumu Shirabe, a medical professor at Nagasaki University and chair of the hibakusha representative screening committee, said Oka was picked because “she provided a vivid depiction of what was happening at the aid station.”

He added he is looking forward to hearing Oka’s message at the ceremony, which will be heard not only in Japan but around the world.