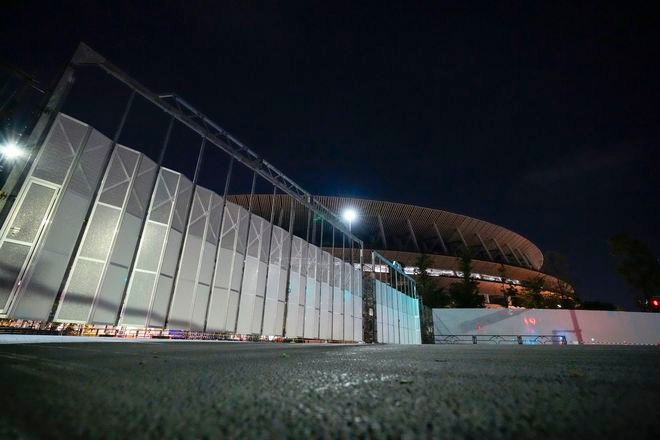 Roads are being closed off on June 11 around the new $1.4 billion National Stadium with the opening ceremony set for July 23 in Tokyo. (AP Photo)

Just under 5 million tickets are already snapped up for the Tokyo Olympics that start next month, according to organizing committee officials.

The 4.8 or so million tickets represent about 42 percent of the maximum capacity of all Olympic venues, officials said in a June 11 report.

The figure includes not only tickets sold to the general public, but also those set aside for elementary and junior high school students as well as those with ties to the Olympics.

Organizing committee officials said the number of tickets set aside for those with some tie to the Olympics, such as corporate sponsors, had been sharply scaled back.

The ticket report was presented to experts advising the organizing committee on measures to combat the novel coronavirus pandemic who will shortly make more recommendations on additional measures to be taken.

About 4.45 million tickets had already been sold when the government decided to postpone the 2020 Olympics for a year. About 810,000 tickets were returned for refunds last year.

The decision in March to not allow spectators living overseas to take part led to refunds for another 630,000 or so tickets.

Schools submitted requests for 600,000 tickets so students could attend an event. Organizing committee officials are aware of only about 10,000 of those tickets being canceled by schools.

The organizing committee also disclosed its estimate of pedestrian traffic during the Olympics in central Tokyo.

On July 31, when the flow of people is expected to reach its peak during the Olympics, 340,000 or so pedestrians are projected to be moving around central Tokyo, including 225,000 spectators and 59,000 individuals connected with the Olympics from overseas.

An organizing committee official said the increase in pedestrian traffic caused by spectators would be less than the expected decrease in commuting students who will be on their summer break.