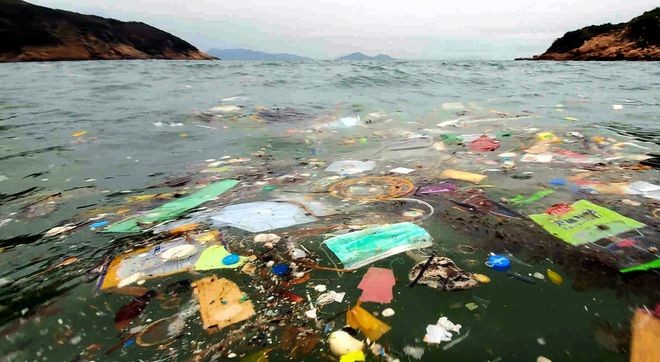 Face masks and other litter drift on the sea. (Provided by OceansAsia)

IZUMISANO, Osaka Prefecture—The skyrocketing use of face masks during the COVID-19 pandemic has exacerbated the immediate and long-term threat of plastic waste to life in the oceans.

Many nonwoven fabric, urethane and other available face masks are made of plastics, such as polypropylene and polyurethane. These and other synthetic fibers can take centuries to decompose in the natural environment.

One environmental group estimated that more than 1.5 billion face masks entered oceans in the year when the pandemic started.

Officials of the Kanagawa Coastal Environmental Foundation said the volume of face masks drifting ashore has increased since the onset of the pandemic. For 30 years, the foundation has been cleaning a 150-kilometer stretch of coastline in the prefecture, which lies southwest of Tokyo.

“Face masks were previously only spotted sporadically in winter, but they have been seen all the year round, including in summer, since the pandemic began,” one foundation official said.

In late May, an Asahi Shimbun reporter saw white face masks washed ashore, along with littered plastic bottles and plastic bags, between breakwater blocks along a jetty in Osaka Prefecture, close to Kansai Airport.

Some of the masks were in tatters, possibly from continued exposure to waves, but others on the shore appeared brand new. Some were made of nonwoven fabric, while others were of urethane.

Six face masks were spotted in just a 30-minute stroll on part of the shore.

The figure was based on market research data, which said 52 billion face masks were produced globally in 2020, and estimates by the United Nations and other parties that about 3 percent of plastic litter was entering oceans.

A single face mask weighs 3 to 4 grams, meaning between 4,680 and 6,240 tons of additional marine litter in one year, the group said.

A Brazilian marine conservation group said in a report last September that a face mask had been found in the stomach of a penguin that was washed ashore in the state of Sao Paulo.

Britain’s Royal Society for the Prevention of Cruelty to Animals said a gull was found immobilized by the ear straps of a face mask tangled around its legs and was rescued last July.

Plastic face masks can drift for long periods in the ocean.

They will gradually break down through exposure to waves and winds and turn into microplastics. This breakdown process can take about 450 years, according to some estimates.

The environmental problems will continue because microplastics are difficult to collect and are eaten by oceanic life, which mistakes them for plankton. The microplastics can then be passed up food chains, including to humans.

Concerned that masks will worsen the problem of marine plastic litter, OceansAsia officials are calling on the public to responsibly dispose of used face masks, such as by using garbage boxes.

They are also calling for public sector intervention, such as toughened crackdowns on littering and promotion of the development of face masks made of sustainable materials.

The government of Shizuoka Prefecture has taken a step to help resolve the issue of littered face masks.

The prefecture on the Pacific coast last year started a subsidy program that grants up to 100,000 yen ($912) to private groups and other entities for cleanup work in the sea and rivers.

In the backdrop is an increasing volume of litter, including not just face masks but also takeout food containers, which have been increasingly used during the health crisis, prefectural government officials said.

“Littered face masks have been seen on streets since the onset of the pandemic,” said Shuhei Tanaka, an associate professor of environmental engineering with the Kyoto University Graduate School of Global Environmental Studies. “That is likely partly because of the widespread idea that face masks are supposed to be thrown away immediately after use.”

Tanaka, who has been studying the plastic-waste issue, said it is important to recognize both aspects of plastics--not just their convenience but also the risk they pose to the environment.