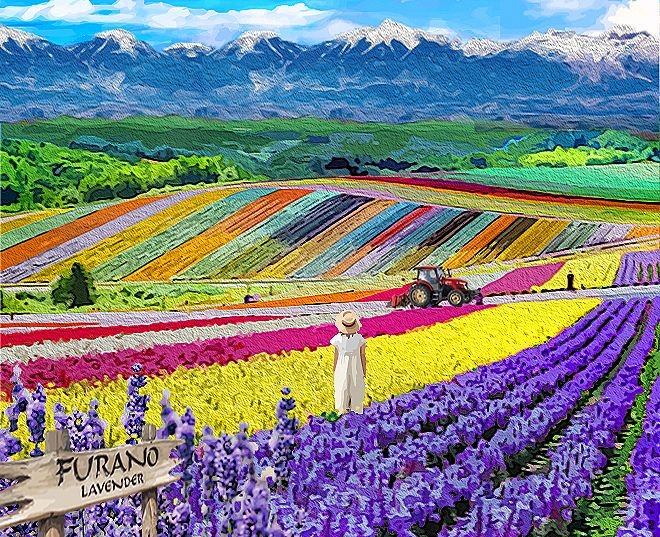 peal of laughter
an echo resonates
in the valley
--Pitt Buerken (Munster, Germany)

African violets...
up to my elbows
in dirt
--Veronika Zora Novak (Toronto, Ontario)

new hobby--
my garden in the care
of gardeners
--Gordana Vlasic (Oroslavje, Croatia)

The haikuist’s family rented a small section of farmable land from the city government. Yutaka Kitajima is sensitive to the way climate change influenced the eating habits and phenology of birds in Joetsu, Niigata Prefecture.

Kiyoshi Fukuzawa noted how this year’s rice planting schedule in Kyushu was moved up when frogs started calling out from warmer-than-usual water-filled paddies and earlier-than-usual rains mixed with sunshine to color the southern skies.

John S. Gilbertson sketched a 5-7-5 ode to the idyllic rural landscape. Wang Hing Ming was inspired by a mural wall painting of a university campus with a panoramic view of Mount Sakurajima. Fukuzawa’s friend who recently passed away may have visited there in his youth.

Germina Melius blew off some steam after having spent all morning kneading dough, carefully cubing mangoes and using a ceramic pie bird to make a hole in her pastry. Shortly after work ended, Robin Rich sat down to a meat pie and pot of good, strong tea in Brighton, U.K.

high tea
fork in
the sky

Mary Vlooswyk gave a nod to the taste of sweet corn harvested at a small farming town in Alberta, noting “people will wait in long lines just to be sure they are getting Taber corn!”

Angela Giordano tended a farm in Avigliano, Italy. Gerald Friedman was amazed at the lights he saw flashing in the Corn State. Saki Imaizumi wrote her haiku near cornfields at Hokusei Gakuen University in Sapporo.

herd grazing
on the laughing mountains
the new grass

Eleven-year-old Raegan Bradbury envied a colorful flyer in Misawa, Aomori Prefecture. Vasile Moldovan explains that it is not uncommon for a chicken to raise a duck on farms in Bucharest, Romania. The hen has very strong mothering instincts and will stay close to her adopted ones, keep them warm and away from danger. Neena Singh enjoyed a colorful garden show in Chandigarh, India. Ana Drobot wondered if a new color might bud in her garden.

The butterfly’s
flaming wings
on the rim of the birdbath

lightning afar--
the ducklings are nestling
under the hatching hen

her smile...
the new rose
he planted

Kanematsu was aghast when neighbors eradicated foreign species of fish from a pond.

Venturing out from her home in Atsugi, Kanagawa Prefecture, Masumi Orihara said she keenly felt the “ephemerality of humans.” Orense Nicod reached for the heavens over Paris, France. By focusing on a shining drop of condensation in Los Angeles, Bona M. Santos achieved a sense of calming awareness.

shooting up
stalks in the human world--
green bamboo

out of the earth
and into the clouds
iris stretches

mindfulness
the glimmer of a rainbow
on morning dew

Helga Stania was inspired by Olafur Eliasson’s installation of a “Life” exhibit at the Beyeler Foundation near Basel: in the museum gently floating green water.

Detached from this world
I follow the scent--
Of another

restored grassland…
the pitch and cadence
of cicadas

This haiku by Marcie Wessels in San Diego, California, added a new dimension to an audio recording of cicadas by her friend on the East Coast that were “getting louder by the minute.”

Brood X
you know where you belong
~ in a stir fry

Santos enjoyed a song that was right on pitch: night heat cicadas hitting the high notes. Murasaki Sagano didn’t sleep long--the summer solstice is June 21. Ashoka Weerakkody felt it was a long night in Columbo, Sri Lanka, after a “shipwreck plunged into this summer solstice scenario with a fierceness our tropical isle had never suffered since the Indian Ocean tsunami 17 years ago.”

Weerakkody noted that despite the pathetic local scenes of the ill-fated MV Xpress Pearl washing up acid-burned bodies, turtles and fish, “due to the corona lockdown our children stay at home and study through on-line classroom sessions … hence the kids’ feelings over the shipwreck may not surface for a while.”

The next issues of the Asahi Haikuist Network appear July 2, 16 and 30. You are invited to send a haiku about scary summer stories, the Tokyo Games, or the Paralympics, on a postcard to David McMurray at the International University of Kagoshima, Sakanoue 8-34-1, Kagoshima, 891-0197, Japan, or e-mail to (mcmurray@fka.att.ne.jp).