By KOSUKE SO/ Correspondent 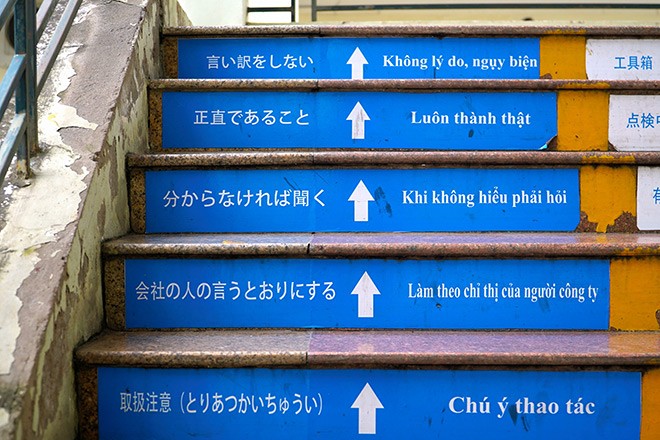 Slogans are written in Japanese and Vietnamese on the staircase of a building in Hanoi in February 2020 where an organization that sends technical intern trainees to Japan is located. (Asahi Shimbun file photo)

HANOI--An organization that oversees Japan's problem-plagued technical intern training program informed the Vietnamese government it will no longer deal with five local companies that provide candidates due to the high number of individuals who vanish after starting jobs in Japan.

The Organization for Technical Intern Training (OTIT) of Japan notified the Department of Overseas Labor (DOLAB), an arm of Vietnam's Ministry of Labor, Invalids and Social Affairs, of the new policy on June 1, according to a document obtained by The Asahi Shimbun.

The OTIT is expected to formally announce the policy shift shortly and begin enforcing it around two months from now.

Companies that dispatch trainees to Japan must be approved by the Vietnamese government. As of June, there were about 460 such providers in Vietnam.

The document said the OTIT decided that a disproportionate number of interns sent by the five dispatch companies had gone missing in Japan compared with the ratio of trainees who disappeared in 2018 and 2019.

The rate of disappearances was three times that of the average for all the companies.

The program, established by the Japanese government to provide job training skills that can be used when the trainees return to their home country, has come in for much criticism, mainly because skeptics view it as a ploy to solve a critical shortage of blue-collar workers in Japan.

Many trainees have complained of being exploited, having wages and overtime withheld and being forced to put in long work hours for a pittance. As a result, hordes of trainees have simply vanished after not turning up for work.

The OTIT's decision came after it studied data on trainees dispatched by each of the Vietnamese sending organizations in 2018 and compared it to individuals who went missing.

A law that took effect in 2017 to provide legal protection for technical intern trainees states that sending organizations must be able to act as brokers, which involves drawing up contracts with Japanese supervising organizations over the dispatch of trainees.

The document obtained by Asahi shows that the OTIT concluded the five sending organizations did not meet those qualifications.

Once the OTIT’s policy takes effect, the five targeted companies will no longer be permitted to dispatch new trainees to Japan.

The five organizations each sent between 700 and 2,700 trainees in 2018, according to calculations based on the ratio of trainees who went missing.

The five organizations are leading providers of staffing services in Vietnam and are believed to have landed numerous contracts with Japanese supervising organizations.

The trainee program has remained in abeyance for new dispatches due to the novel coronavirus pandemic.

The dispatch of Vietnamese trainees could be affected if the OTIT's policy against the five companies remains in place even after restrictions on the entry of trainees are eased.

As of late 2019, prior to the start of the pandemic, there were about 410,000 foreign trainees across Japan, according the Immigration Services Agency of Japan.

Of the total, Vietnamese accounted for 220,000, or more than half of the overall number.

Experts blame exorbitant commission fees that Vietnamese sending organizations charge applicants as one reason for the disappearances. Many trainees find they need to find better-paying jobs to repay loans they took out.

It has become increasingly common for sending organizations charge up to three times the $3,600 (400,000 yen), the maximum amount set under law.

As a result, trainees end up with large debts before they even set foot in Japan.