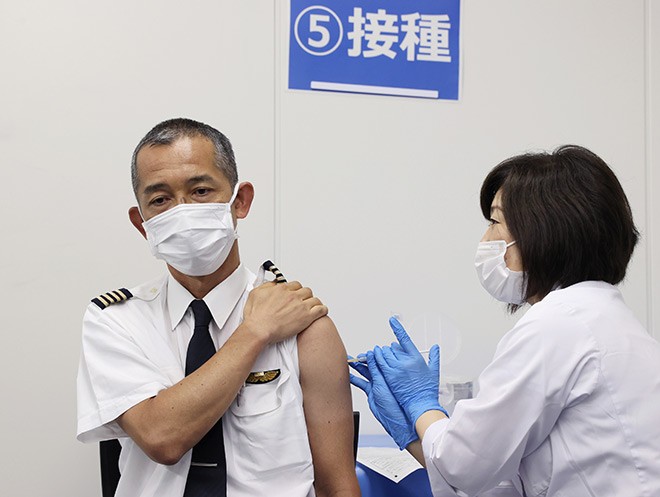 An employee of All Nippon Airways Co. receives a novel coronavirus jab at Haneda Airport on June 13. (Yasuhiro Sugimoto)

All Nippon Airways Co. on June 13 became the first Japanese business to begin a company-wide inoculation campaign against the novel coronavirus, ahead of the government's initially planned June 21 start.

The carrier began administering prioritized vaccinations to pilots and cabin attendants serving international flights who wanted to get vaccinated at its Tokyo office at Haneda Airport.

ANA’s campaign comes as the government steps up calls for inoculations across the business sector, part of a larger effort to swiftly vaccinate as many as people as possible, not just health care workers and senior citizens.

ANA said it was able to move up the start to June 13 as supplies of Moderna vaccines, related storage equipment and vaccination venues had been secured after the company accelerated preparations for the program.

After receiving his jab, pilot Takuya Ebata, said, “Now that I have got a shot, I can work with a sense of security, but will continue to take precautions so I don't get infected.”

About 10,000 pilots and cabin attendants serving international flights will be among first group to receive jabs if they wish to get vaccinated.

ANA said about 46,500 employees within the ANA group are eligible for jabs.

On June 13, the company expected to administer shots to about 50 employees. It plans to expand the capacity to 300 a day at a later date.

Japan Airlines Co. plans to begin an in-house vaccination program at Haneda Airport on June 14. About 36,000 employees at JAL and its affiliates will be eligible.

The airline industry has requested mass vaccinations of employees as their duties require them to fly overseas.

Other industries are preparing to start mass vaccinations on June 21.