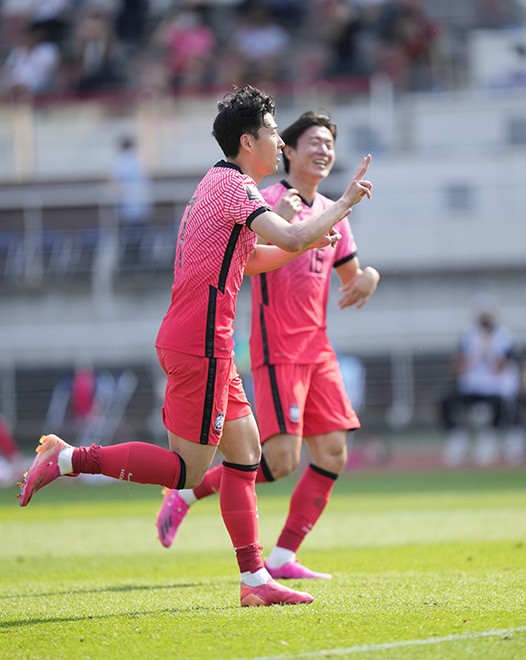 SEOUL--Son Heung-min sent a message of support to former Tottenham Hotspur teammate Christian Eriksen on Sunday after his second-half penalty gave South Korea a 2-1 win over Lebanon in Asia’s second round of World Cup qualifying.

Sonny Saad gave Lebanon a surprise lead in Goyang after just 12 minutes but it was erased early in the second half by a Song Min-kyu header.

Son converted a penalty in the 66th minute and appeared to say “Chris, stay strong, I love you,” to television cameras in a message of support for Eriksen who collapsed on the field while playing for Denmark in a European championship game against Finland on Saturday.

Son’s goal, his first for his country since 2019, means that South Korea is one of the eight group winners who will progress automatically to the third round, scheduled to start in September. Lebanon will have to wait until the second round ends on Tuesday to find out if it goes into the next stage as one of the best four runners-up.

Advancing a one of the top runners-up is also the only way China can add to its sole World Cup appearance in 2002. A win over Group A leader Syria on Tuesday will be enough but a draw will leave the team needing results in other groups to go its way.

“We know what we have to do,” said China coach Li Tie after his team's 5-0 thrashing of the Maldives on Friday, its third successive win. “We know that Syria is a strong team but the players are looking forward to the challenge. Everything is going as planned.”

Iran, seeking a third successive World Cup appearance, is also in second place and needs a win over Group C leader Iraq in Bahrain to be sure of advancing. After losing to Iraq and Bahrain in November 2019, Iran has returned to form with three comfortable wins this month, the most recent a 10-0 beatdown of Cambodia on Friday.

“I enjoyed that performance but the game is over and now we focus on Iraq,” said Dragan Skocic, Iran’s Croatian coach. “We respect Iraq and I hope my team play as they played against Hong Kong, Bahrain and Cambodia in their previous matches.”

Bert van Marwijk led his native Netherlands to the final of the 2010 World Cup, where the Dutch lost 1-0 to Spain, and exited at the group stage with Australia in 2018. To be sure of a place in the next stage of Asian qualifying, his United Arab Emirates team needs to defeat Group G leader Vietnam in Dubai.

“For me, Vietnam together with Thailand are our strongest opponents. Vietnam plays a different system; we know that,” Van Marwijk said. “The players already know what to do when you play against a system like that but Vietnam have also good results, so it will be a tough game and we need to keep fighting.”

Australia and Japan have both won all seven games so far in the second round to seal progress early and will extend their perfect records if they defeat Jordan and Kyrgyzstan, respectively.