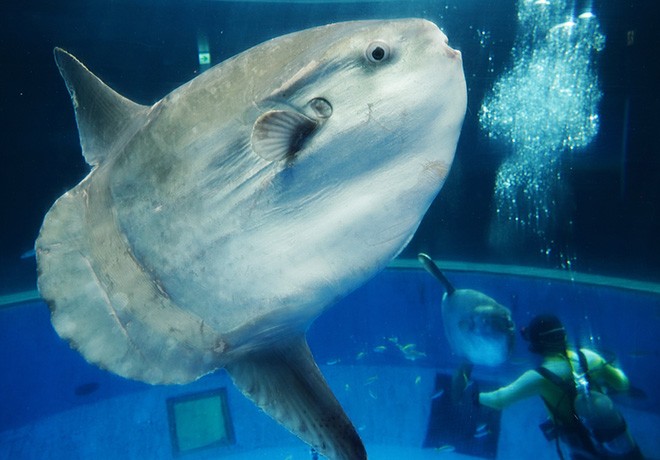 The ocean sunfish, which looks like it’s missing the rear half of its body, is popular for its appearance among admirers of sea creatures.

It lacks ribs like its relative, the pufferfish, and also has a similar skeletal structure, according to Tameyoshi Yo, a staff member at Yokohama Hakkeijima Sea Paradise.

Unlike the pufferfish, however, the ocean sunfish has no need to inflate itself to protect itself from predators.

In Japan, the fish lives in waters nationwide, from Hokkaido to Okinawa Prefecture, swimming close to the shore for several months from April. An adult can measure three meters in length and weigh more than two tons.

The aquarium in Yokohama’s Kanazawa Ward keeps ocean sunfish in a 7-meter-tall cylindrical tank for display. At the time of the video shoot for this article, seven sunfish caught in a fixed fishing net off the coast of Yokosuka, Kanagawa Prefecture, were seen swimming around in the tank.

When Yo, clad in a wet suit, descended into the tank, some of the fish approached the diver to try and get food while others stayed clear.

The ocean sunfish, in its natural environment, eats jellyfish and small fish. At the aquarium, it is fed fish and shrimp processed in a blender and solidified in gelatin.

The ocean sunfish is prone to stress, and it is difficult to raise the species in aquariums.

Because the ocean sunfish swims in straight lines, many aquariums cover the walls of the tank with plastic sheets to prevent the fish from bashing into the tank’s sides. At the Yokohama aquarium, a water current is generated inside the cylindrical tank to reduce the risk of the fish hitting the walls.

Staff member Tameyoshi Yo explains about ocean sunfish at the Yokohama Hakkeijima Sea Paradise aquarium in Yokohama’s Kanazawa Ward on May 25. (Video by Toshiyuki Takeya)