EDITORIAL: Ministry should come clean on alleged collusion with Toshiba 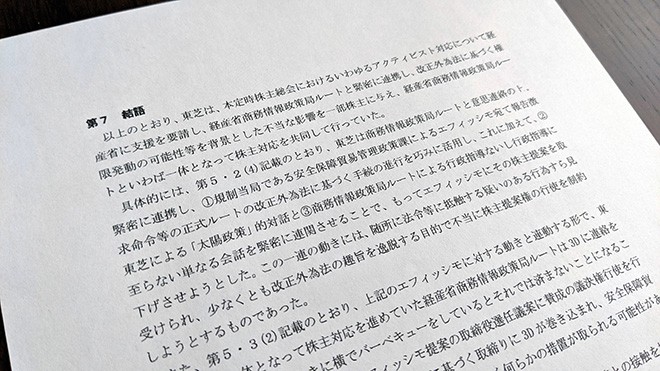 An investigative report has concluded that Toshiba Corp.’s annual general meeting of shareholders last year was not fairly managed.

It says the ministry of economy, trade and industry also worked in unison with Toshiba’s management to unduly prevent shareholders from submitting proposals and exercising voting rights.

The situation should be taken seriously if those arguments are true. Both the ministry and Toshiba should promptly respond to the allegations.

During the general meeting, foreign funds, including Effissimo Capital Management Pte. Ltd., submitted their own proposals for appointing directors, only to be voted down.

Effissimo proposed, during an extraordinary general meeting of shareholders in March, an investigation into the way last year’s general meeting was managed, designating lawyers to be assigned to the probe. The proposal was approved by a majority of votes.

The investigative report portrays how officials of an industry ministry department overseeing the matter worked closely with Toshiba’s management to block the realization of proposals from activist shareholders.

In so doing, ministry officials repeatedly referred to provisions of the Foreign Exchange and Foreign Trade Law that regulate foreign investments from the viewpoint of national security, the report says.

The report said the officials behaved “in a way that might conflict with confidentiality obligation under the National Public Service Law,” such as when they leaked to Toshiba information they had obtained from Effissimo. It said they also exerted undue influence on other foreign funds.

The report also cited Toshiba’s document that quoted Yoshihide Suga, chief Cabinet secretary at the time, as saying, “If we push hard, we can catch them by the foreign exchange thing, right?” when a senior Toshiba official reported the development to him.

The Foreign Exchange and Foreign Trade Law says overseas investors are required to notify the government in advance if they plan to acquire stakes in companies of “designated industries.”

Toshiba, which operates a nuclear power business, among others, is included in the “core industries,” or those deemed particularly important to national security among companies in “designated industries.”

Accordingly, foreign investors are subject to certain regulations on their actions, for example, when they propose to have individuals with connections appointed to Toshiba’s board of directors or to transfer or discontinue Toshiba’s business operations.

It is a basic premise, however, that legal provisions and due process should be followed even when the motivation comes from national security.

Japan’s capital market would lose the confidence of players at home and abroad if deviations, excessively discretionary decisions, and collusive ties between authorities and industries were permitted. Contorted management of a supposedly important company would pose a disadvantage from the viewpoint of economic security.

The probe, although conducted at Effissimo’s proposal, appears based on certain grounds, at least partially, because it has scrutinized documents and materials submitted by Toshiba, interviews of its directors and electronic data.

The industry ministry and, needless to say, Toshiba should provide explanations with definite grounds regarding the facts and the presence or absence of undue behavior. The same can be said of Suga, who is now prime minister.

When it released the report on June 10, Toshiba said it would “carefully review this investigation report and plans to announce its comments toward (its findings) at a later date.”

Industry minister Hiroshi Kajiyama told a news conference on June 11 that he would “wait, before everything, for Toshiba to study what it will do in response.”

We hope they are not “working in unison” to prepare their response measures.