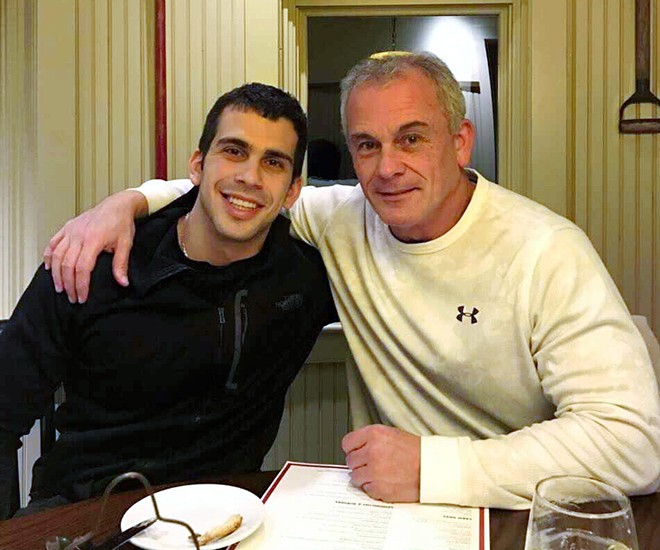 Michael Taylor, right, and his son, Peter (Photo provided by the defense team, via The Asahi Shimbun)

Two Americans suspected of helping former Nissan chairman Carlos Ghosn flee Japan while he was out on bail go on trial Monday in Tokyo.

Michael Taylor, a former Green Beret, and his son Peter Taylor are suspected in the Houdini-like operation where Ghosn hid in a box for music equipment that was loaded onto a private jet that flew him to Lebanon, via Turkey in December 2019.

Unlike the U.S., Lebanon has no extradition treaty with Japan. Ghosn has French, Lebanese and Brazilian citizenship.

The Taylors were arrested in Massachusetts in May last year and extradited in March on charges of helping a criminal. The authorities say Ghosn hired the Taylors for at least $1.3 million.

Ghosn led Japanese automaker Nissan Motor Co. for two decades before his arrest in November 2018. He was charged with falsifying securities reports in under-reporting his compensation and of breach of trust in using Nissan money for personal gain. Ghosn says he is innocent.

At Monday’s court session, the Tokyo District Prosecutors will outline the allegations against the Taylors before Presiding Judge Hideo Nirei and two other judges.

The Taylors will also likely make statements. They have been held in a Tokyo detention center since arriving in Japan and were not available for comment.

Peter Taylor said in a statement to a Massachusetts court in January that he met Ghosn in 2019 in Japan to pitch his digital marketing company to repair Ghosn’s tarnished reputation. He said Ghosn asked him to bring him gifts, food and DVDs from his wife, as well as to deliver gifts, including to family members in Lebanon.

Peter Taylor also said he left Japan for Shanghai on Dec. 29, 2019, and was not in Japan at the time of the alleged escape. He denied he was in touch with his father at that time, according to a document from the Massachusetts District Court.

A third person, George-Antoine Zayek, also is suspected of helping Ghosn escape Japan. Zayek has not been arrested.

Ghosn has said he fled Japan while out on bail because he did not expect to get a fair trial. More than 99 percent of criminal cases in Japan result in convictions.

No Japanese executives have been charged in the scandal at Nissan, Yokohama-based manufacturer of the Leaf electric car, March subcompact and Infiniti luxury models.

Separately, the trial of another American, Greg Kelly, a former executive vice president at Nissan, is also underway at the Tokyo District Court. It began in September. Kelly says he is innocent of the charge of under-reporting Ghosn’s compensation and was only involved in finding legal ways to pay Ghosn more to prevent him from leaving the company for a rival automaker.

Before his arrest, Ghosn was an auto industry star for having orchestrated Nissan’s rebound from the brink of bankruptcy after he was sent to Japan by its French alliance partner Renault in 1999.

Ghosn slashed his pay by about 1 billion yen ($10 million) to half of what he’d been getting, starting in 2010, when disclosure of high executive pay became required in Japan. The concern was that his relatively high compensation might be viewed unfavorably since Japanese top executives tend to draw lower pay packages than their peers in other countries.

At the heart of Kelly’s trial is the question of whether the so-called “shortfall” in Ghosn’s pay violated the law in deferring compensation that should have been reported. Several high-ranking officials, including non-Japanese executives, knew about the shortfall.