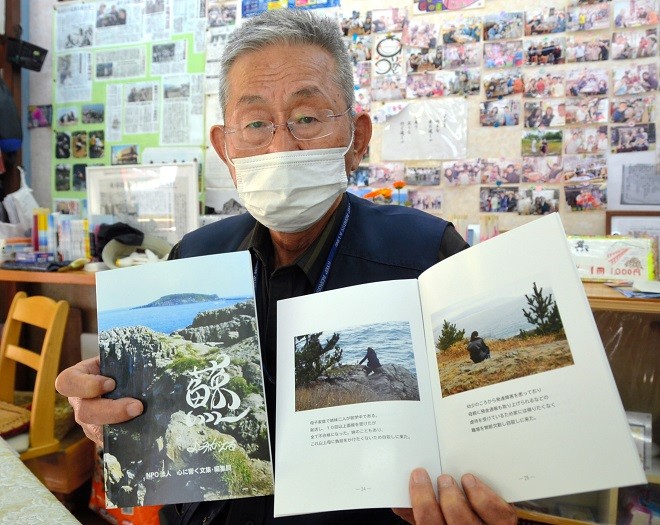 Yukio Shige, head of the Kokoro ni Hibiku Bunshu Henshukyoku group, which has released “Yomigaeru,” a collection of images showing the backs of suicidal visitors to a rocky coast area, poses on May 14 in Sakai, Fukui Prefecture. (Keibu Horikawa)

SAKAI, Fukui Prefecture--A despondent woman in her 30s, seemingly peering into the ocean off a sheer cliff, said she came to the Tojinbo coast here because she “did not want to cause extra trouble to my parents.”

She had failed in more than 10 job interviews.

A fortysomething man, who was looking at the sea from a bench, said he was left with psychological trauma from bullying during his junior high school days. He had developed the fear of people and become pessimistic about the future.

The two were part of a photo collection released by a nonprofit organization (NPO) to stop suicides at the popular Tojinbo suicide spot.

All the individuals are seen only from the back or from the side. The photos are aimed at urging readers to “speak to people when they find such retreating figures.”

Tojinbo is a tourist location marked by a series of cliffs cut by raging waves in the Sea of Japan, and has been designated by the state as a scenic site and natural treasure.

Volunteer members patrol rocky zones in Tojinbo six days a week so that they can talk to individuals who appear to be suicidal. If those people are spotted, the group members carefully listen to their concerns.

When the would-be jumpers have problems at their workplaces, the volunteers will talk to their supervisors. Some troubled people are allowed to temporarily take refuge at the organization's shelter, while such efforts as putting them in contact with relevant public organizations are also made for suicidal visitors’ mental recovery.

Yukio Shige, 77, a former officer of Fukui prefectural police and chairman of the nonprofit group, is approached by people working nationwide to stop suicides. Shige said he is often asked “how you can identify those thinking of killing themselves.”

Shige usually replies that they “wear more unassuming clothes than sightseers and their behavior, eye motions and other features suggest they are in the depths of despair.”

But he decided it would be better for promoting understanding to show suicidal people’s images than to simply explain his long-accumulated expertise through words.

The 38-page, A5-size full-color photo collection portrays 17 individuals who appeared at the rugged coastline between summer and autumn 2020.

Written consent was obtained from all of them after they were saved and had time to contemplate. Suicidal people were briefed on the objectives of the project and each explained why they wanted to leap off the cliffs.

A total of 21,081 people took their own lives in 2020, marking the first year-on-year rise in 11 years. Life changes and other factors deriving from the novel coronavirus are said to have resulted in the increase.

Shige and his colleagues found 33 suicidal people from both in and outside Fukui Prefecture in 2020--one more than that of the previous year--and four of them said they decided to go to Tojinbo because of virus-related reasons.

Exhibited in the photo book, a woman nodding off on the rugged coast with sleeping pills could not find employment during the health crisis. She had been unable to pay her rent and was driven out of her apartment.

The group has also received complaints from such individuals as a nurse in her 20s who “cannot go to work out of concerns about the coronavirus” and a man in his 60s who is “a construction worker but has no work.”

“No one in their hearts wants to die even the moment they are about to jump from the rocks,” said Shige.

He noted that not only those on the rocky coast but also people considering jumping from station platforms or buildings’ rooftops “stay still for a while to wait for someone around them to speak to them.”

“They are shouting, ‘Help me,’ inside,” Shige said. “Our activities are to rescue people’s lives. I would like you to talk to them if you discover those individuals. With a word of affection, they will be resurrected with flying colors.”

Using the welfare ministry’s subsidy, 500 copies of the collection of images were distributed to volunteer groups as well as anti-suicide departments of all prefectural governments and major cities with near-prefecture-level authority.

Additional copies are available at the Kokoro ni Hibiku Oroshimochi cafe, which doubles as the office of the nonprofit group, for 1,000 yen ($9.11).