Suga: Priority is vaccination program, not timing of election 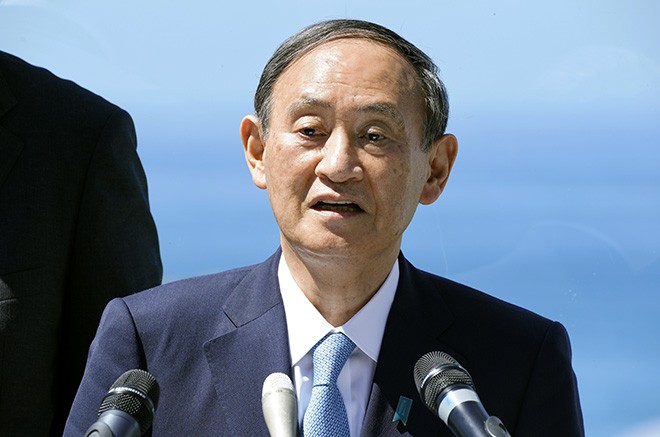 Prime Minister Yoshihide Suga answers questions from reporters in Cornwall, Britain, on June 13 after the conclusion of the Group of Seven summit. (Kotaro Ebara)

CORNWALL, Britain—Facing intense criticism at home, Prime Minister Yoshihide Suga reiterated he is prioritizing the acceleration of the COVID-19 vaccination campaign and other anti-virus measures over talks of a possible snap Lower House election.

“My top priority is grappling with the coronavirus,” Suga told reporters after the Group of Seven summit wrapped up here on June 13.

In Japan, the main opposition Constitutional Democratic Party of Japan is threatening to submit a no-confidence motion against the Suga Cabinet, demanding that the current Diet session be extended well beyond June 16, the last day of the scheduled session.

Opposition lawmakers, who have criticized the government’s actions during the pandemic, have said a supplementary budget is needed for measures to deal with the spread of the novel coronavirus.

But Suga’s Liberal Democratic Party is opposed to the extension, saying most of the key government-sponsored bills have been passed.

LDP Secretary-General Toshihiro Nikai has repeatedly referred to a possible dissolution of the Lower House as the party’s answer to a no-confidence motion submitted by the opposition.

Asked whether he intends to dissolve the Lower House if a no-confidence motion is submitted, Suga stopped short of giving a clear answer.

“I will think about the matter when it is submitted,” he said.

The Lower House must be dissolved by October, when the current four-year terms for lawmakers in the Diet chamber expire.

When the next election will be called has been the subject of intense speculation.

Many political observers expect the prime minister to dissolve the chamber by the end of September, when his term as LDP president is up and after the Tokyo Olympics and Paralympics are finished.

CDP Secretary-General Tetsuro Fukuyama, on a news program of Japan Broadcasting Corp. (NHK) on June 13, said the no-confidence motion will be submitted with a full awareness that it could trigger the dissolution of the Lower House.

However, other opposition lawmakers do not appear to be on the same page.

Although the parties are united about demanding an extension of the Diet session, some lawmakers are raising doubts about submitting a no-confidence motion at this stage.

“We cannot understand why we have to submit a no-confidence motion if the Diet session extension is rejected,” Nobuyuki Baba, secretary-general of the Japan Innovation Party, said during the NHK program.

Suga also said his government will make a final decision this week on whether to lift or extend the COVID-19 state of emergency, which is set to expire in Tokyo and other areas on June 20. He said the decision will be based on consultations with health experts, assessments of the infection situation and other factors.

He noted that new COVID-19 cases have been trending downward across the country, but crowds are returning to urban centers.

Asked about whether the government will allow spectators to attend the Tokyo Olympics and Paralympics, Suga did not answer the question directly.

“We have agreed to decide on the matter in June, considering the spread of infections in Japan and how other sports events have been held,” he said.

The Summer Games open on July 23 and the Paralympics on Aug. 24.

(This article was compiled from reports by Ryo Aibara in Cornwall and Tsubasa Yokoyama in Tokyo.)