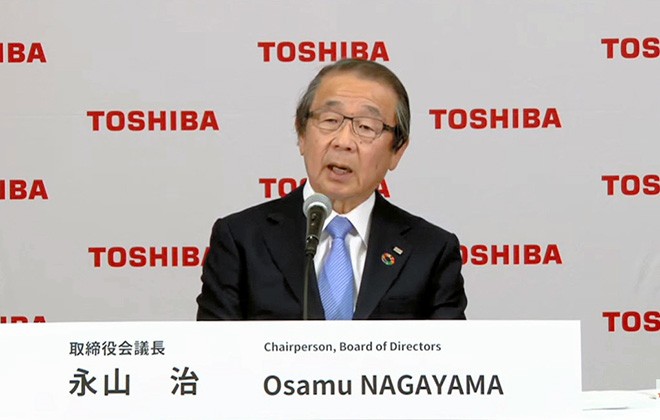 Osamu Nagayama, who heads Toshiba Corp.’s board of directors, at an online news conference on June 14 (Yasuro Suzuki)

The head of Toshiba Corp.’s board of directors is apologizing following a third-party investigation that found the company colluded with the government to lean on foreign shareholders.

Osamu Nagayama admitted that an exchange made between the company and the industry ministry was inappropriate, and pointed blame for the scandal at the former head of Toshiba, Nobuaki Kurumatani.

“I have to say that there was a lack of legal compliance and corporate governance,” he said. “I apologize for making a situation that worries and troubles (people).”

Nagayama made the comments at a news conference on June 14 in response to the external report, which concluded that the company “did not fairly conduct” a general meeting of its shareholders last summer.

At an extraordinary meeting on June 13, Toshiba board members decided to retire two outside directors from the board. Junji Ota, who heads the company’s audit committee, as well as Takashi Yamauchi, a member of that committee, will be excluded from the list of director candidates to be put before the June 25 general shareholders meeting.

The board also decided at its extraordinary meeting to have Masayasu Toyohara, the company’s senior vice president, and Masaharu Kamo, a managing director, disposed from their positions effective as of June 25. The report said Toyohara and Kamo had negotiated with the ministry.

Nagayama said the four “became a factor that caused a major disruption” at the conglomerate.

Nagayama said Kurumatani, Toshiba’s former president who resigned in April to take the blame for CVC Capital Partners’ proposal to acquire Toshiba, should be held accountable for the scandal.

“I cannot deny that his presence became one of the factors. He caused management turmoil and it is hard to ignore his responsibility,” Nagayama said.

Nagayama promised that Toshiba will establish a third-party panel to investigate the cause and determine responsibility.

Nagayama said there was a “lack of supervisory function” under his watch. But he said he will not resign because of the necessity for business continuity.