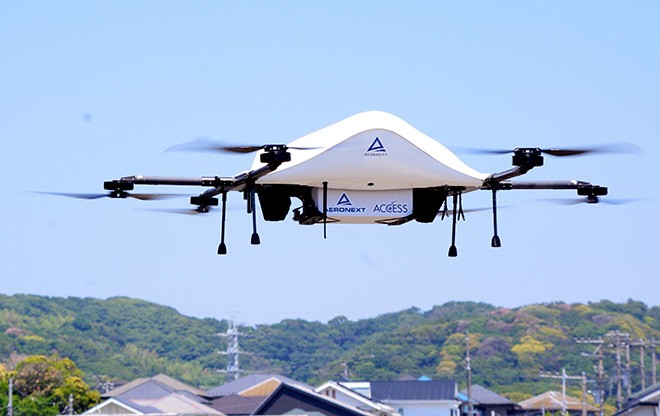 In a flight demonstration for news media this month, staff at the iconic beef-bowl chain working out of a food truck near a park in the city cooked up enough mouth-watering gyudon dishes for four people.

Demae-can staff then put the dishes into a box that keeps them warm and loaded it onto a drone. It sped away and about 10 minutes later it arrived on the roof of a city-run hospital some five kilometers away.

It passed the test with flying colors, and the gyudon dishes were handed out to hospital personnel.

The drone used in this test can deliver a package that weighs up to five kilograms, according to the company representatives.

Deliveries like this one could soon become a lot more frequent, as delivery services eye ways to integrate drones into their operations amid rising competition among both domestic and foreign-affiliated companies, which has resulted in a shortage of delivery staff.

Once the Civil Aeronautics Law is revised, which could happen as early as fiscal 2022, drones can be flown beyond the line of sight of their operators--even above urban areas and other locations where people live.

“We will consider various ways of using drones, such as for delivering a substantial amount of food to a facility,” said Hideo Fujii, Demae-can’s president.