Curbs on alcohol could remain after state of emergency ends 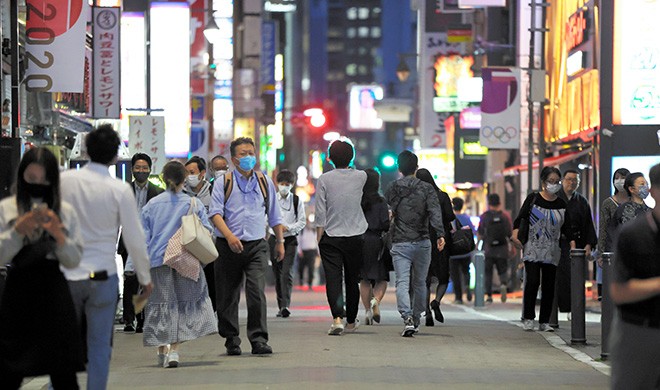 Pedestrians in an entertainment area of the Shinbashi district in Tokyo, which is under the COVID-19 state of emergency, on May 28 (Naoko Kawamura)

The government is considering maintaining restrictions on alcohol-serving businesses in Tokyo and Osaka Prefecture after it lifts the COVID-19 state of emergency on June 20 as scheduled, according to multiple government sources.

The sources said the government also plans to apply pre- or quasi-emergency measures in those urban centers starting from June 20.

Government officials are also discussing whether to switch to pre-emergency measures for the eight other prefectures currently under the state of emergency.

In the capital, all indicators regarding the spread of infections have dipped below the most serious level of stage 4, which calls for the government to consider issuing a state of emergency.

But Shigeru Omi, who heads the government’s expert panel on the pandemic, warned that it is extremely important that all indicators be moving steadily toward stage 2 before the emergency declaration is lifted.

Foot traffic in Tokyo has been increasing, putting the government on the high alert against a possible resurgence of infections ahead of the scheduled opening of the Tokyo Olympics on July 23.

Against this backdrop, the government intends to keep in place some of the anti-infection measures taken under the state of emergency, the sources said.

“Applying pre-emergency measures is one option since we can impose strict restrictions almost equivalent to those under a state of emergency,” said one Cabinet minister.

An aide to the prime minister said anti-infection measures should not be eased, indicating that restrictions on bars and restaurants, which the government believes are potential hotspots for outbreaks, will remain in place.

Under the state of emergency, businesses have been asked to suspend operations if they serve alcohol.

The government is considering continuing the effective ban on serving alcohol beyond June 20 or allowing establishments to offer alcohol until 7 p.m.

However, some officials are urging caution on lifting the emergency declaration in Okinawa Prefecture, where the occupancy rate of hospital beds remains high, at 96 percent.

The Okinawa prefectural government’s expert panel agreed at its meeting on June 14 that the prefecture should ask the central government to extend the state of emergency by two weeks.

The prefectural government will soon decide on whether to make the formal request.

The central government will hear opinions from its expert panel about its plan to lift the emergency declaration after considering the infection situation of each area.

If the plan is approved, the government will make an official decision on the matter as early as June 17.

(This article was written by Keishi Nishimura, Kohei Morioka and Tomoe Ishikawa.)